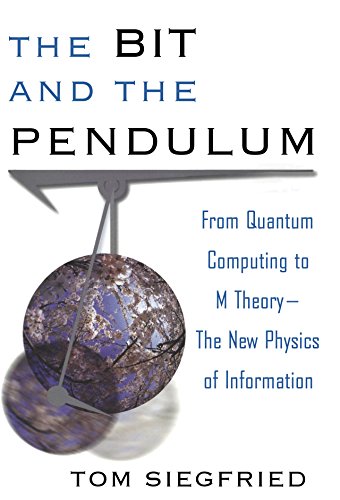 The Bit and the Pendulum
by Tom Siegfried

In Stock
$14.49
+10% GST
An award-winning science journalist argues that the most important frontier for science in the 21st century is the "new physics of information" which is leading the way to new understandings in a broad range of areas, from how the DNA code controls how cells work to how the neurons in our brains transmit messages.
Very Good Good
Only 1 left

The Bit and the Pendulum Summary

The Bit and the Pendulum: From Quantum Computing to M Theory--The New Physics of Information by Tom Siegfried

Funny, clear, deep, and right on target. [Siegfried] lets us get a handle on ideas that are essential for understanding the evolving world.
-K. C. Cole, author of The Universe and the Teacup
""An eager, ambitious book. A stimulating, accessible introduction to scientific theory.""
-Dallas Morning News
An award-winning journalist surveys the horizon of a new revolution in science
Everything in the universe, from the molecules in our bodies to the heart of a black hole, is made up of bits of information. This is the radical idea at the center of the new physics of information, and it is leading to exciting breakthroughs in a vast range of science, including the invention of a new kind of quantum computer, millions of times faster than any computer today. Acclaimed science writer Tom Siegfried offers a lively introduction to the leading scientists and ideas responsible for this exciting new scientific paradigm.

The Bit and the Pendulum Reviews

* ""Light stopped."" So read a number of headlines over recent news articles, about scientists bringing light to a full stop in a laboratory. The more careful writers explained that actually the experiments consisted of capturing all the information about some light rays in a soup of atoms and laser beams; this information could be used to reassemble the rays later and send them on their way. ""The Bit and the Pendulum"" explores the possibility that everything, heaven and earth and all that is in them, is, like that light, but a manifestation of information. Physical scientists are likely to meet this idea with a dismissive shrug; they are quite happy with energy as the foundation of everything. On the other hand, information scientists are likely to find the idea quite natural and exciting. Tom Siegfried, the science editor of The Dallas Morning News, invites the general reader to come to a personal conclusion. Siegfried posits that science, particularly physics, and by extension the rational view of the universe, have been driven by a succession of metaphorical worldviews - ""superparadigms."" In turn, these are motivated by the dominant machines of the era. The first: The universe as clockwork (the pendulum of the title) is manifested in Newtonian mechanics. Here force is a key concept, and energy, kinetic and potential, first appears as a conserved quantity. The second, some centuries later: The universe as a large heat engine Is manifested in the theory of thermodynamics, motivated by the steam engine. Energy, the key concept, is conserved, but entropy, or useless heat energy, increases, so the universe is running down. The third, motivated by the computer, the dominant machine of today, sees the universe as a large information processor. Entropy is information.

Information has a precise definition as the state of a system. The simplest bit of information is an either-or state, a zero or one, up or down, yes or no, or a protein either active or inactive (this last connects biology and information). Any system - an atom, a human, the universe - can be completely described by the answers to a few tens of yes-no questions (20 questions, anyone?); that is, a few tens of bits. An information processor, a computer, is a system that transforms its state, according to rules, into a new state. Do not underestimate the import of all this. The thesis developed in the book is that information is not a formal way of analyzing systems and their behavior. ""Information is real. Information is physical,"" Siegfried writes. And later: ""Information is more than a metaphor -it is a new reality."" And the progression of events through time is computation, so the universe is essentially a huge. If mysterious, computer.

To illustrate, Siegfried begins with the idea of teleportation: ""Beam me up, Scotty."" If teleportation really exists - and Siegfried shows it does in some sense - it would consist of transporting not matter but the complete information about the structure of an object, every molecule of Captain Kirk, in such a way that the information in the previous location is destroyed. In this view of reality, Siegfried says, ""information is the ultimate 'substance' from which all things are made""; witness the light of the recent headlines.

This concept, at most a few decades old in this form, is controversial. Learned opinions vary from complete acceptance to laughing rejection. This book is personal journalism. The author has met with many of the principal movers and shakers. He lets them speak for themselves and recounts his own intellectual journey. He has attended the scientific meetings and read the scientific papers. His primary mentors seem to have been the physicist John Wheeler, a professor of his at the University of Texas, Austin, and the late Rolf Landauer of I.B.M., a primary figure in the physical theory of information (and a deep skeptic about some of the newer directions of exploration).

The book is not about

TOM SIEGFRIED is Science Editor of the Dallas Morning News. He is the recipient of the 1997 American Psychiatric Association's Robert T. Morse Writer's Award.

GOR002827535
The Bit and the Pendulum: From Quantum Computing to M Theory--The New Physics of Information by Tom Siegfried
Tom Siegfried
Used - Very Good
Paperback
Turner Publishing Company
2001-01-03
288
0471399744
9780471399742
N/A
Book picture is for illustrative purposes only, actual binding, cover or edition may vary.
This is a used book - there is no escaping the fact it has been read by someone else and it will show signs of wear and previous use. Overall we expect it to be in very good condition, but if you are not entirely satisfied please get in touch with us.