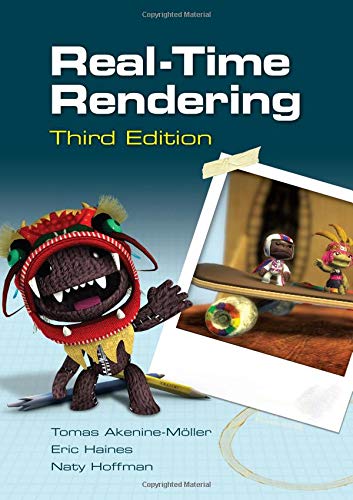 Thoroughly revised, this third edition focuses on modern techniques used to generate synthetic three-dimensional images in a fraction of a second. With the advent of programmable shaders, a wide variety of new algorithms have arisen and evolved over the past few years. This edition discusses current, practical rendering methods used in games and other applications. It also presents a solid theoretical framework and relevant mathematics for the field of interactive computer graphics, all in an approachable style. The authors have made the figures used in the book available for download for fair use.:Download Figures.

Rendering has been a required reference for professional graphics practitioners for nearly a decade. This latest edition is as relevant as ever, covering topics from essential mathematical foundations to advanced techniques used by today's cutting edge games.
-- Gabe Newell, President, Valve, May 2008

Rendering ... has been completely revised and revamped for its updated third edition, which focuses on modern techniques used to generate three-dimensional images in a fraction of the time old processes took. From practical rendering for games to math and details for better interactive applications, it's not to be missed.
-- The Bookwatch, November 2008

Tomas Akenine-Moller is a professor of computer science, specializing in computer graphics and image processing, at the Department of Computer Science, Lund University, Sweden. He received an MSc in Computer Science and Engineering from Lund in 1995, and a PhD in computer graphics from Chalmers University of Technology in 1998. In 2000 he was a post doc at UC Berkeley and he also spent time at UC San Diego (2004/2005) as a visiting researcher. Eric Haines is a Lead Software Engineer at Autodesk, Inc., working on a next-generation interactive rendering system for computer-aided design applications. He is currently an editor of the journal of graphics tools, online editor for ACM TOG, and maintainer of the Graphics Gems code repository, among other activities. He received an MS from the Program of Computer Graphics at Cornell in 1985. Naty Hoffman has been developing videogame graphics for over a decade. Previously he was a microprocessor architect at Intel. He has contributed to the development of numerous games as well as instruction set extensions, major graphics APIs, and processors. Naty is particularly interested in physically-based real-time rendering methods, on which he has published several articles and taught classes at SIGGRAPH, I3D, GDC and Meltdown.

GOR007680789
Real-Time Rendering by Tomas Akenine-Mo ller
Tomas Akenine-Mo ller
Used - Very Good
Hardback
Taylor & Francis Inc
2008-07-25
1045
1568814240
9781568814247
N/A
Book picture is for illustrative purposes only, actual binding, cover or edition may vary.
This is a used book - there is no escaping the fact it has been read by someone else and it will show signs of wear and previous use. Overall we expect it to be in very good condition, but if you are not entirely satisfied please get in touch with us.