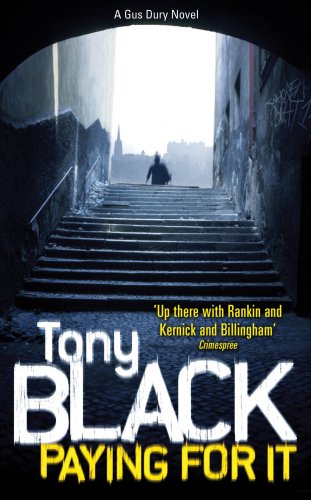 Paying For It
by Tony Black

Used Price
$25.99
inc. GST
Free Shipping in Australia
But now he is living on the edge, a drink away from Edinburgh's down-and-outs, drifting from bar to bar, trying not to sign divorce papers.
Reviews:
Trustpilot
Very Good

Paying For It Summary

Paying For It by Tony Black

Gus Dury once had a high-flying career as a journalist and a wife he adored. But now he is living on the edge, a drink away from Edinburgh's down-and-outs, drifting from bar to bar, trying not to sign divorce papers. But the road takes an unexpected turn when a friend asks him to investigate the brutal torture and killing of his son, and Gus becomes embroiled in a much bigger story of political corruption and illegal people-trafficking. Seedy doss-houses, bleak wastelands and sudden violence contrast with the cobbled streets and cool bistros of fashionable Edinburgh, as the puzzle unravels to a truly shocking ending.

Customer Reviews - Paying For It

Paying For It Reviews

A fine debut. Black is the new noir -- Allan Guthrie
Tony Black's first novel hits the ground running, combining a sympathetic ear for the surreal dialogue of the dispossessed with a portrait of the belly of a city painted in the blackest of humour -- Guardian
Paying For It might just be the most aptly titled novel of the year. Rarely has a title worked on so many levels... the narrative blasts off the page like a triple malt... This is one adrenalin-pumped novel, as moving and compassionate as it is stylishly written -- Ken Bruen, author of The Guards novels
Assuming (and hoping) that this is the first of many featuring the tortured Gus Dury, we've never seen a series character so richly and honestly drawn from the get-go. The emotional punches connect solidly in Paying For It, as the pains of being a father and the pains of being a son are laid bare. The debut of the year * Thuglit.com *
Of all the new writers emerging this year, he is the one to watch * Martyn Waites, author of the Joe Donovan series *

Tony Black lives in Edinburgh. An award-winning journalist, he has written for most of the UK national newspapers. He is currently writing his second Gus Dury novel, Gutted.

GOR001217829
Paying For It by Tony Black
Tony Black
Used - Very Good
Paperback
Cornerstone
2009-06-04
352
1848090226
9781848090224
N/A
Book picture is for illustrative purposes only, actual binding, cover or edition may vary.
This is a used book - there is no escaping the fact it has been read by someone else and it will show signs of wear and previous use. Overall we expect it to be in very good condition, but if you are not entirely satisfied please get in touch with us.