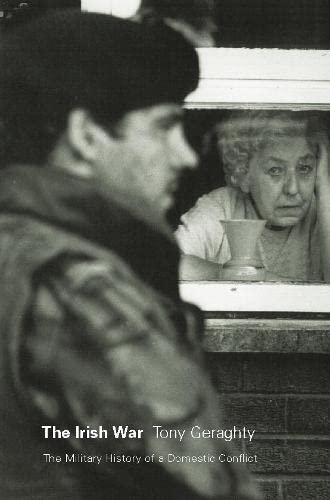 The Irish War
by Tony Geraghty

A full and definitive account of the war waged between Irish Republicans and England over three centuries by the bestselling author of `Who Dares Wins', with emphasis on the latterday role of the special forces.

The Irish War by Tony Geraghty

A full and definitive account of the war waged between Irish Republicans and England over three centuries by the bestselling author of `Who Dares Wins', with emphasis on the latterday role of the special forces.

From the Battle of the Boyne in 1690 to the Downing Street Declaration of 1993, Britain and Ireland have been in mortal conflict over the sovereignty of the Emerald Isle. In `The Irish War', bestselling author Tony Geraghty writes a full and compelling account of the tragic three-hundred-year war, tracing the path to today's weary peace.

From his years of reporting the outbreak of the troubles in 1969 for the Sunday Times to the present, Tony Geraghty has covered every bloody twist and turn of the IRA and the Loyalist campaigns, but his unerring eye for detail took him back through the centuries to uncover the roots and causes of the grievances and feuds that have been so ruthlessly fought over in the past twenty-five years. The result is a powerful history of England's ruthless aggression against her small Catholic neighbour and that tiny island's utter determination to oust the bullying intruder. After the battles of the Boyne and Aughrim, deserted by the last of their officers and with inferior resources, the Irish reinvented the rules of warfare to their advantage. The battle cry of Sinn Fein - `Ourselves Alone' - went up and a code of fighting that ignored the rules of war was let loose.

Tracing the roots and meaning of the terrible war that has been fought overtly and covertly for three hundred years, `The Irish War' is essential reading for all those seeking to understand the relations between these two nations.

"Geraghty has produced a book both readable and alarming. The first third is a well-observed account of a largely visible British war machine coping with the horrors of the Northern Ireland Troubles. The last third is devoted to militarism in Ireland up to 1921. But it is the middle third, the covert war, that astonishes. We learn that [British Intelligence] had a habit of enticing suspects away from home with lavish 'dodgy' holidays in the sun by faking breakfast-food competitions. While the target was away, the Security Service would plant a host of listening devices, which might include a miniaturized video camera inside a domestic light switch." -- Herald (Glasgow)

Tony Geraghty, author of the SAS history Who Dares Wins, The Bullet Catchers and Beyond the Front Line, is himself a military veteran, first with the Paras and then as a British officer in the Gulf conflict. As a liaison officer with US forces he was awarded an American decoration. He is also an Irish citizen.

GOR010558115
The Irish War by Tony Geraghty
Tony Geraghty
Used - Like New
Paperback
HarperCollins Publishers
2000-09-04
448
0006386741
9780006386742
N/A
Book picture is for illustrative purposes only, actual binding, cover or edition may vary.
This is a used book - there is no escaping the fact it has been read by someone else and it will show signs of wear and previous use. Overall we expect it to be in very good condition, but if you are not entirely satisfied please get in touch with us.