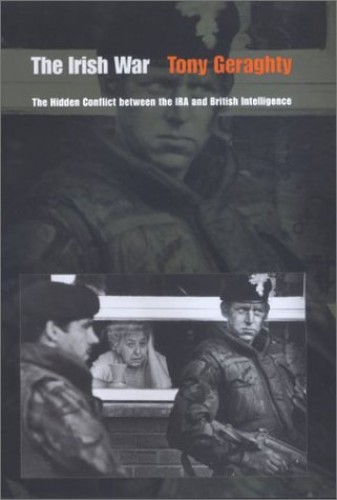 The Irish War
by Tony Geraghty

In Stock
$58.99
inc. GST
Military veteran and historian Tony Geraghty reveals the patterns of action and reaction in this generations-old domestic conflict. Drawing on public and covert sources, as well as interviews, he brings to light the inner workings of an organized terrorist group and its military opposition.
Good
Only 1 left

The Irish War: The Hidden Conflict between the IRA and the British Intelligence by Tony Geraghty

Military veteran and historian Tony Geraghty reveals the sinister patterns of action and reaction in this generations-old domestic conflict. Drawing on public and covert sources, as well as interviews with members of British Intelligence, the security forces, and the Irish Republican Army, he brings to light the disturbing inner workings of an organized terrorist group and its military opposition.

"Anyone interested in the 'war that isn't, ' should find this book enlightening." -- Larry S. Sterrett, New Gun Week

"The book's strengths are its attention to detail and its direct, potent writing... A compelling introduction to a painful struggle." -- Publishers Weekly

"The role of British Intelligence in Ulster has never been so deeply explored... He writes clearly and knowledgeably about the impact on the IRA of the use of forensics by British Intelligence. He describes in detail the IRA's success in modifying and developing its own weapons, particularly mortars, and writes of the SAS's often lethal operations in Ulster with a kind of righteous anger not seen since American journalists inveighed against our role in Vietnam... Clearly well researched." -- Library Journal

"Geraghty has produced a book both readable and alarming. The first third is a well-observed account of a largely visible British war machine coping with the horrors of the Northern Ireland Troubles. The last third is devoted to militarism in Ireland up to 1921. But it is the middle third, the covert war, that astonishes. We learn that [British Intelligence] had a habit of enticing suspects away from home with lavish 'dodgy' holidays in the sun by faking breakfast-food competitions. While the target was away, the Security Service would plant a host of listening devices, which might include a miniaturized video camera inside a domestic light switch." -- Herald (Glasgow)

GOR010323199
The Irish War: The Hidden Conflict between the IRA and the British Intelligence by Tony Geraghty
Tony Geraghty
Used - Good
Paperback
Johns Hopkins University Press
2002-11-30
472
0801871174
9780801871177
N/A
Book picture is for illustrative purposes only, actual binding, cover or edition may vary.
The book has been read but remains in clean condition. All pages are intact and the cover is intact. Some minor wear to the spine.