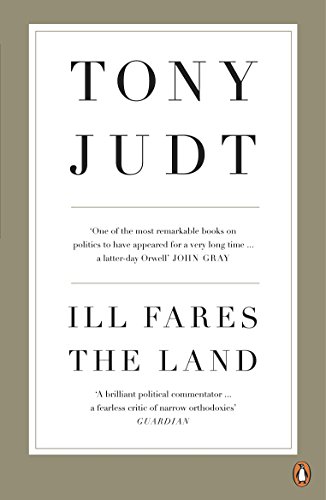 In Stock
$11.49
+10% GST
If we are to replace fear with confidence then we need a different story to tell, about state and society alike: a story that carries moral and political conviction. This book provides that story.
Very Good Good
9 in stock

Ill Fares The Land: A Treatise On Our Present Discontents by Tony Judt

Something is profoundly wrong with the way we live today. For thirty years we have made a virtue out of the pursuit of material self-interest: indeed, this very pursuit now constitutes whatever remains of our sense of shared purpose. But we have forgotten how to think about the life we live together: its goals and purposes. We are now not only post-ideological; we have become post-ethical. We have lost touch with the old questions that have defined politics since the Greeks: is it good? Is it fair? Is it just? Is it right? Will it help bring about a better society? A better world? The social contract that defined postwar life in Europe and America - the guarantee of security, stability and fairness - is no longer assured; in fact, it's no longer part of collective conversation.

In this exceptional short book, Tony Judt reveals how we have arrived at our present dangerously confused moment and masterfully crystallizes our great unease, showing how we might yet think ourselves out of it. If we are to replace fear with confidence then we need a different story to tell, about state and society alike: a story that carries moral and political conviction. Providing that story is the purpose of this book.

Sinewy analysis and supple prose, as clear and refreshing as a mountain stream -- Christopher Silvester * Telegraph *
One of the most remarkable books on politics to have appeared for a very long time -- John Gray * Literary Review *
Elegant, courageous and deeply humane -- Dominic Sandbrook * Sunday Times *

At the time of his death, Tony Judt was the Erich Maria Remarque Professor in European Studies at New York University. In 1996 he was elected a Fellow of the American Academy of Arts and Sciences and in 2007 a corresponding Fellow of the British Academy. In 2009 Judt was awarded a Special Orwell Prize for Lifetime Achievement for his contribution to British Political writing. Postwar: A History of Europe Since 1945 (2005) was a runner up for the 2006 BBC Samuel Johnson Prize for Non-Fiction and Pulitzer Prize for General Non-Fiction.

GOR003212075
Ill Fares The Land: A Treatise On Our Present Discontents by Tony Judt
Tony Judt
Used - Very Good
Paperback
Penguin Books Ltd
2011-04-07
256
0718191412
9780718191412
N/A
Book picture is for illustrative purposes only, actual binding, cover or edition may vary.
This is a used book - there is no escaping the fact it has been read by someone else and it will show signs of wear and previous use. Overall we expect it to be in very good condition, but if you are not entirely satisfied please get in touch with us.