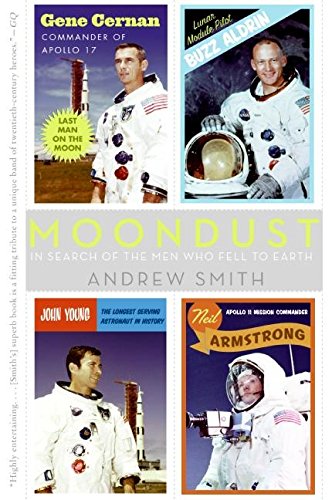 Moondust: In Search of the Men Who Fell to Earth by Translator Andrew Smith, Sir (University College Dublin)

In time for the 50th anniversary of the Apollo 11 moon landing comes this edition of journalist Andrew Smith's Moondust, now updated with a new Afterword, that tells the fascinating story of twelve astronauts who ventured to space, and his interviews with nine of the surviving men.

The Apollo lunar missions of the 1960s and 1970s have been called the last optimistic acts of the twentieth century. Twelve astronauts made this greatest of all journeys and were indelibly marked by it, for better or for worse. Journalist Andrew Smith tracks down the nine surviving members of this elite group to find their answers to the question "Where do you go after you've been to the Moon?"

A thrilling blend of history, reportage, and memoir, Moondust rekindles the hopeful excitement of an incandescent hour in America's past when anything seemed possible as it captures the bittersweet heroism of those who risked everything to hurl themselves out of the known world--and who were never again quite able to accept its familiar bounds.

"Splendid!"--Arthur C. Clarke, author 2001: A Space Odyssey
"Wonderful... Smith examines [the questions] not just in the political context of the times but, refereshingly, with regard to the popular culture and the mood of the moment... A fascinating book, often poignant... but funny too."--Daily Mail (London), Critics Choice Award
"Smith's mix of reporting and meditation is highly entertaining, and his superb book is a fitting tribute to a unique band of 20th-century heroes."--GQ
"Moondust is an inspired idea, immaculately executed: witty, affectionate, completely captivating."--WORD magazine
"Fascinating...We know what happened inside the Apollo, but what went on inside the astronauts' minds? Extremely thought-provoking."--J. G. Ballard, author of Empire of the Sun and Memories of the Space Age
"Smith is a graceful, easy-going writer, and this beguiling tale is replete with joyful wonder ... Moondust belongs to the same "New Journalism" tradition as Tom Wolfe's The Right Stuff."--London Times (Sunday)
"A wonderful collective biography written with deftness, compassion and humour."--The Observer
'Enthralling...Smith is an ideal narrator: sharp-eyed yet increasingly affectionate about his subjects."--Financial Times
"Riveting...so vivid you can almost smell the suburban lawns."--Time Out London
"In an artful blend of memoir and popular history, Smith makes flesh-and-blood people out of icons and reveals the tenderness of his own heart."--Publishers Weekly
"A wild ride swerving between then and now."--Richmond Times Dispatch
"Smith's book is an engrossing read, full of humor, insight, and appreciation for the vision and outright zaniness that marked the only human mission to another world."--Space Daily
"Spellbinding...a provocative meditation on lunar travel and humanity's relation to space."--Business Week
"Smith's book succeeds...because he bungee-cords together so many intriguing digressions."--New York Times

Andrew Smith has worked as a broadcast commentator and an investigative feature writer for publications including The Face, The Guardian, and the Sunday Times. He has also written and presented radio series and films for the BBC, including the acclaimed documentary Being Neil Armstrong. He lives with his wife, Jan, in the San Francisco Bay Area.

GOR010314367
Moondust: In Search of the Men Who Fell to Earth by Translator Andrew Smith, Sir (University College Dublin)
Translator Andrew Smith, Sir (University College Dublin)
Used - Well Read
Paperback
HarperCollins Publishers
2006-08-08
370
0007155425
9780007155422
N/A
Book picture is for illustrative purposes only, actual binding, cover or edition may vary.
This is a used book. We do our best to provide good quality books for you to read, but there is no escaping the fact that it has been owned and read by someone else previously. Therefore it will show signs of wear and may be an ex library book.