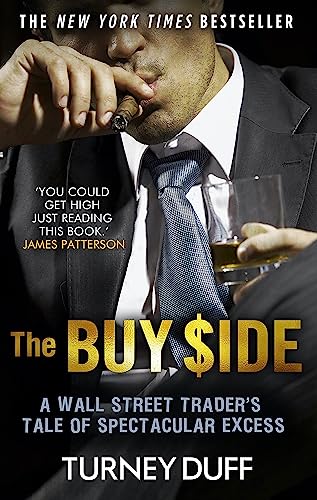 The Buy Side
by Turney Duff

The Buy Side Summary

The Buy Side: A Wall Street Trader's Tale of Spectacular Excess by Turney Duff

The Buy Side is Turney Duff's high-adrenaline journey through the trading underworld, as well as a searing look at an after-hours Wall Street culture where sex and drugs are the quid pro quo and a billion isn't enough.

In the mid-2000's, Turney Duff was, to all appearances, the very picture of American success. One of Wall Street's hottest traders, he was a rising star with Raj Rajaratnam's legendary Galleon Group before forging his own path. What few knew was that the key to Turney's remarkable success wasn't a super-genius IQ or family connections but rather a winning personality - because the real money wasn't made on the trading floor or behind a computer screen, but in whispered deals in the city's most exclusive nightspots, surrounded by the best drugs and hottest women. For Turney, this created a perilously seductive cycle: the harder he partied, the more connected and successful he became, which meant he could party even harder. In time, he became a walking paradox, an addictive mess after hours, and King of the Street from nine to five. Along the way, he learned some important lessons about himself, and the too-wild-to-believe world of Wall Street trading.

In The Buy Side, the money is plentiful and the after-hours indulgence even more so, which has proved to be a bestselling and box office winning combination, as the success of The Wolf of Wall Street attests. Fans of Martin Scorsese's film and Michael Lewis's Liar's Poker and The Big Short will want to take a walk on The Buy Side.

Customer Reviews - The Buy Side

The Buy Side Reviews

This is why I keep my money safe and sound under the mattress. You could get high just reading this book. Mamas, don't let your babies grow up to be Wall Street traders. -- James Patterson
The book is by turns hilarious, harrowing, maddening, and illuminating. After this debut, the smart money will be on Duff. -- Bethany McLean New York Times bestselling author of The Smartest Guys in the Room and All the Devils Are Here
The perfect parable for Wall Street's lost decade. A fast-paced coke-crazed trip through Manhattan nightlife that conjures Bright Lights, Big City, to an eyewitness account of insider trading and front running that reads like a federal indictment. -- Guy Lawson * New York Times bestselling author of Octopus *
The Buy Side is `Wall Street' meets `Breaking Bad' - except that this book is fact not fiction. Turney Duff yields to temptation at every turn, and the sheer volume of criminal behavior he saw, and even participated in, is astonishing...If you want to see Wall Street's seamy underbelly first-hand, read this book. -- Frank Partnoy * bestselling author of F.I.A.S.C.O and Infectious Greed *

Turney Duff has worked on Wall Street since 1994, including at Morgan Stanley, the Galleon Group, Argus Partners, and J.L. Berkowitz.

GOR008677828
The Buy Side: A Wall Street Trader's Tale of Spectacular Excess by Turney Duff
Turney Duff
Used - Very Good
Paperback
Little, Brown Book Group
2017-07-13
304
1472127706
9781472127709
N/A
Book picture is for illustrative purposes only, actual binding, cover or edition may vary.
This is a used book - there is no escaping the fact it has been read by someone else and it will show signs of wear and previous use. Overall we expect it to be in very good condition, but if you are not entirely satisfied please get in touch with us.