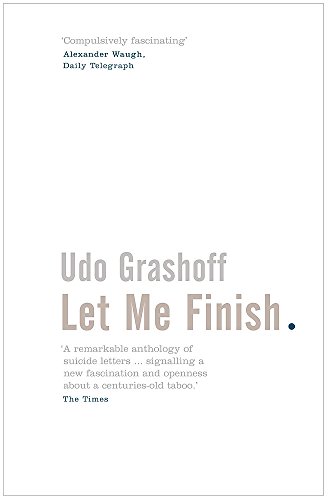 Let Me Finish
by Udo Grashoff

Out of Stock
$27.99
inc. GST
A remarkable and thought-provoking anthology of over 45 suicide notes
Well Read
Only 0 left

Let Me Finish by Udo Grashoff

Suicide has been part of human life since the dawn of time, but has never been so widely and openly discussed as it is today. With the ongoing debate about the rights of the terminally ill to end their own lives, the phenomenon of Internet sites dedicated to advice on how to end your life, and the craze for mass suicides among the Japanese, suicide is rarely out of the news in the 21st century.

Udo Grashoff has discovered 45 suicide notes that help us to better understand why despairing people commit the ultimate taboo. In this fascinating collection those reasons are remarkably universal, from unrequited love, to loss of a spouse, to simple frustration with a domestic situation.

Despite the universality of its subject matter, this book is unique.

Udo Grashoff is a journalist and medical historian. He first discovered these letters through academic research and has lectured widely on the subject.

GOR007134808
Let Me Finish by Udo Grashoff
Udo Grashoff
Used - Well Read
Paperback
Headline Publishing Group
2007-01-01
192
0755314441
9780755314447
N/A
Book picture is for illustrative purposes only, actual binding, cover or edition may vary.
This is a used book - there is no escaping the fact it has been read by someone else and it will show signs of wear and previous use. Overall we expect it to be in very good condition, but if you are not entirely satisfied please get in touch with us.