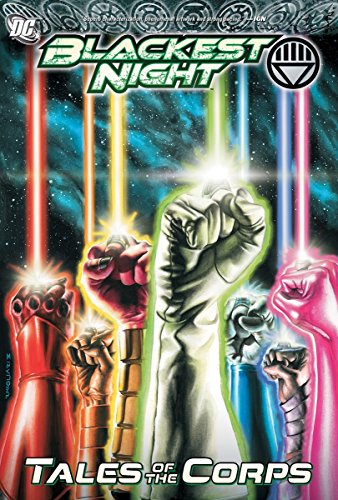 "Originally published in single magazine form in Blackest night: tales of the corps 1-3, Green Lantern 49, Adventure Comics 4, 5, Blackest night 2-8"--T.p. verso.
Written by GEOFF JOHNS, PETER J. TOMASI and STERLING GATES Art by JERRY ORDWAY, IVAN REIS, DAVE GIBBONS, DOUG MAHNKE and others Cover by DAVE GIBBONS and RODOLFO MIGLIARI From the pages of TALES OF THE CORPS #1-3, GREEN LANTERN #49 and ADVENTURE COMICS #4-5: Witness Saint Walker's pilgrimage of hope, Carol Ferris's sacrifice for love, the debut of the Indigo Tribe and more! On sale JULY 27 * 176 pg, FC, $19.99 US
Geoff Johns is an award-winning writer and one of the most popular contemporary comic book writers today. Johns is the author of the New York Times best-selling graphic novels Aquaman: The Trench, Blackest Night, Green Lantern: The Sinestro Corps War, Justice League: Origin, Superman: Brainiac and Batman: Earth One which hit number one on the bestseller list. He is also known for transforming Green Lantern into one of the most critically and commercially successful franchises in comics. Johns has written for various other media, including episodes of Smallville, Arrow, and Adult Swim's Robot Chicken, for which he was nominated along with his co-writers for an Emmy. He is the Chief Creative Officer of DC Entertainment and resides in Los Angeles, California.

Peter J. Tomasi is a New York Times best-selling author known for his current work on Superman and previous projects Batman and Robin, Superman/Wonder Woman, Batman - Detective Comics, and Batman Arkham Knight, along with other commercially successful books including Green Lantern Corps, Brightest Day, Emerald Warriors, and Nightwing. Over the course of his career with DC Comics--more than two decades of hit books--Peter served as a group editor ushering in new eras for Batman, Green Lantern, and JSA along with special projects like Kingdom Come. Peter also is the author of the creator owned books Light Brigade (Dark Horse) with artist Peter Snejbjerg, The Mighty (Dark Horse) with Keith Champagne and artists Peter Snejbjerg and Chris Samnee, and the critically acclaimed horror/drama series House of Penance (Dark Horse) with artist Ian Bertram.

Sterling Gates was born and raised in Tulsa, Oklahoma. He earned a degree in Art from the University of Oklahoma, specializing in Film and Media Arts. After moving to Los Angeles, Sterling worked as writer's room production assistant on TV's Blade: The Series, later becoming assistant to comic book industry giant Geoff Johns.

Sterling recently scripted the Man of Steel prequel comic (based on a story by David S. Goyer, Geoff Johns, and Zack Snyder) in a joint digital publishing venture between DC Comics and Wal-Mart, and he served as writer/producer on the award-winning, independent, live action superhero feature film, The Posthuman Project.

Currently, Sterling is writing Adventures of Supergirl, a digital first comic book based on CBS' hit television show, Supergirl. He's also working on a number of super-secret projects he wishes he could tell you about, but seriously, they're super-secret.

GOR005052521
Blackest Night by
Used - Very Good
Paperback
DC Comics
2011-07-27
176
1401228070
9781401228071
N/A
Book picture is for illustrative purposes only, actual binding, cover or edition may vary.
This is a used book - there is no escaping the fact it has been read by someone else and it will show signs of wear and previous use. Overall we expect it to be in very good condition, but if you are not entirely satisfied please get in touch with us.
Trustpilot