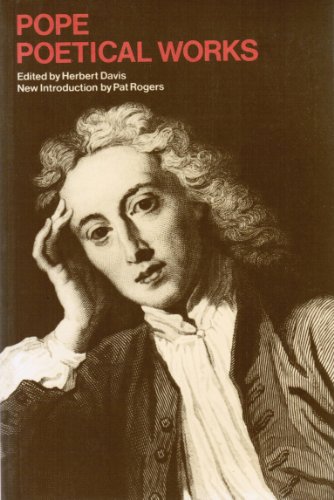 Condition - Very Good
$18.99
Only 1 left
Very Good
Reviews:
Trustpilot
Alexander Pope's exceptional talent and fierce ambition made him England's first truly professional poet. His writings are the finest poetic expression of the ideals of an age in which cultured taste insisted above all on elegance of form - whether demonstrated in a handsomely proportional building, a landscaped garden, or a graceful couplet. Pope's mastery of language enabled him to praise, mock, censure, or moralize with equal skill. He could prick the balloon of conceit with a single line or redeploy the entire paraphernalia of the classical epic to bemoan the loss of a lock of hair or to unmask pretentiousness and false values. The formal harmony and balance of his poems reflect a profound sense of moral order, enlisting wit and satire as correctives to vanity and pompousness.

This edition contains all of Pope's poems, except his translations from Homer. The editor, Herbert Davis, has selected texts which follow Pope's latest wishes both in substance and accidentals, and has also included Pope's own annotations. Pat Rogers, Debartolo Professor of Liberal Arts at the University of South Florida, has written an introduction for this paperback edition.

GOR004972569
Poetical Works by
Oxford Paperbacks
Used - Very Good
Paperback
Oxford University Press
1978-09-01
776
0192812467
9780192812469
N/A
Book picture is for illustrative purposes only, actual binding, cover or edition may vary.
This is a used book - there is no escaping the fact it has been read by someone else and it will show signs of wear and previous use. Overall we expect it to be in very good condition, but if you are not entirely satisfied please get in touch with us.
Trustpilot