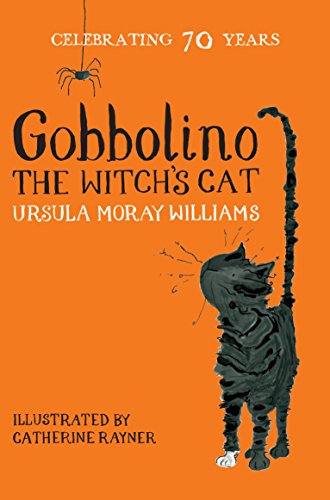 No one could mistake Gobbolino for a simple kitchen cat, with his sparky whiskers and magic tricks, but that's just what the witch's kitten wants to be. Instead of learning how to turn mice into toads for the witch's brew, Gobbolino sets out on an adventure to find a family and a home of his own.

Reissued for its 70th anniversary with illustrations by the award-winning Catherine Rayner, this classic tale has been loved by generations of children.

Ursula Moray Williams wrote and illustrated over 70 children's books in her lifetime. Born in 1911, she was one of identical twins, both of whom started to write and illustrate their own books at a young age. After spending time in France, Ursula's first book Jean Pierre was published when she was just twenty. Set in the Haute-Savoie region which she knew so well, it followed the adventures of a small boy and his pet goat. Moray Williams wrote her most famous story, The Adventures of the Little Wooden Horse, in 1938, in which a little toy horse is separated from his toymaker `uncle' and must endure many dangerous adventures before finally finding a happy ending. A few years later in, 1942, she went on to write Gobbolino, the Witch's Cat, which soon became a firm favourite with children. Her books have been illustrated by Edward Ardizzone and Shirley Hughes, among others. A new edition of Gobbolino, the Witch's Cat was published in February 2012 on the 70th anniversary of its publication, and Moray Williams' classic tale of courage and hope, The Adventures of the Little Wooden Horse, was reissued in October 2011. Catherine Rayner studied illustration at Edinburgh College of Art. She fell in love with the city and still lives there with her family and a small menagerie of creatures including Shannon the horse, Ena the cat and a goldfish called Richard, all of whom inspire her artwork. In 2008 Catherine was selected as one of the Ten Best New Illustrators for Booktrust's Big Picture Campaign. She has been short-listed for the prestigious Kate Greenaway Medal four times, and won in 2009 for Harris Finds His Feet. In addition to illustrating for other authors such as Michael Bond, Holly Webb and Michael Morpurgo, she has also written her own picture books, including Ernest, Solomon Crocodile, Solomon and Mortimer and Smelly Louie, which won the Peter's Book of the Year award in 2015.

GOR007770730
Gobbolino the Witch's Cat by Ursula Moray Williams
Ursula Moray Williams
Used - Like New
Hardback
Pan Macmillan
2012-10-11
256
0230761658
9780230761650
N/A
Book picture is for illustrative purposes only, actual binding, cover or edition may vary.
This is a used book - there is no escaping the fact it has been read by someone else and it will show signs of wear and previous use. Overall we expect it to be in very good condition, but if you are not entirely satisfied please get in touch with us.