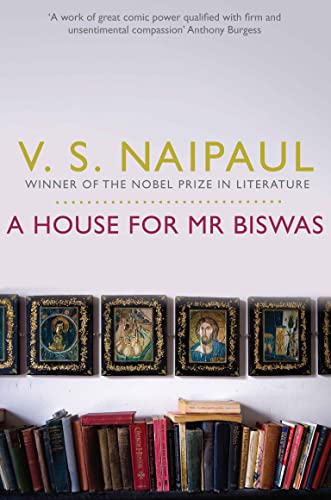 A House for Mr Biswas
by V. S. Naipaul

Out of Stock
$26.99
inc. GST
From the winner of the Nobel Prize in Literature, A House for Mr Biswas is V. S. Naipaul's best-loved novel.
Like New
Only 0 left

A House for Mr Biswas Summary

A House for Mr Biswas by V. S. Naipaul

A House for Mr Biswas is Nobel Prize in Literature winner V. S. Naipaul's unforgettable masterpiece. Heart-rending and darkly comic, it has been hailed as one of the twentieth century's finest novels, a classic that evokes a man's quest for autonomy against the backdrop of post-colonial Trinidad.

He was struck again and again by the wonder of being in his own house, the audacity of it: to walk in through his own front gate, to bar entry to whoever he wished, to close his doors and windows every night.

Mr. Biswas has been told since the day of his birth that misfortune will follow him - and so it has. Meaning only to avoid punishment, he causes the death of his father and the dissolution of his family. Wanting simply to flirt with a beautiful woman, he ends up marrying her, and reluctantly relying on her domineering family for support. But in spite of endless setbacks, Mr. Biswas is determined to achieve independence, and so he begins his gruelling struggle to buy a home of his own.

V.S. Naipaul was born in Trinidad in 1932. He came to England on a scholarship in 1950. He spent four years at University College, Oxford, and began to write, in London, in 1954. He pursued no other profession.

In 1990, V.S. Naipaul received a knighthood for services to literature; in 1993, he was the first recipient of the David Cohen British Literature Prize. He received the Nobel Prize in Literature in 2001. He lived with his wife Nadira and cat Augustus in Wiltshire, and died in 2018.

GOR010183613
A House for Mr Biswas by V. S. Naipaul
V. S. Naipaul
Used - Like New
Paperback
Pan Macmillan
2011-01-27
640
0330522892
9780330522892
N/A
Book picture is for illustrative purposes only, actual binding, cover or edition may vary.
The book has been read, but looks new. The book cover has no visible wear, and the dust jacket is included if applicable. No missing or damaged pages, no tears, possible very minimal creasing, no underlining or highlighting of text, and no writing in the margins.