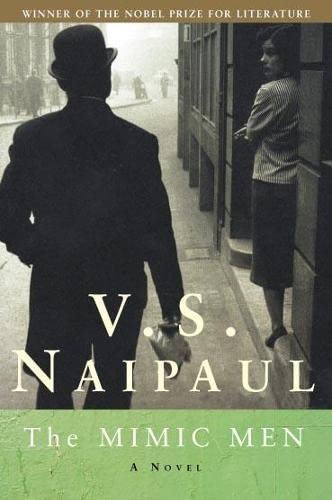 A profound and moving and often humorous novel that evokes a colonial man's experience in the post-colonial world.

Born of Indian heritage, raised in the British-dependent Caribbean island of Isabella, and educated in England, forty-year-old Ralph Singh has spent a lifetime struggling against the torment of cultural displacement. Now in exile from his native country, he has taken up residence at a quaint hotel in a London suburb, where he is writing his memoirs in an attempt to impose order on a chaotic existence. His memories lead him to recognize the cultural paradoxes and tainted fantasies of his colonial childhood and later life: his attempts to fit in at school, his short-lived marriage to an ostenatious white woman. But it is the return of Isabella and his subsequent immersion in the roiling political atmosphere of a newly self-governing nation - every kind of racial fantasy taking wing - that ultimately provide Singh with the necessary insight to discover the crux of his disillusionment.

'The sweep of Naipaul's imagination, the brilliant fictional frame that expresses it, are in my view eithout equal today'

V. S. Naipaul was born in Trinidad in 1932. He went to England on a scholarship in 1950. After four years at University College, Oxford, he began to write, and since then has followed no other profession. He has published more than twenty books of fiction and non-fiction, including Half a Life, A House for Mr Biswas, A Bend in the River and most recently The Masque of Africa, and a collection of correspondence, Letters Between A Father and Son. In 2001 he was awarded the Nobel Prize in Literature.
GOR001241403
9780330487108
0330487108
The Mimic Men by V. S. Naipaul
V. S. Naipaul
Used - Very Good
Paperback
Pan Macmillan
2002-05-10
288
N/A
Book picture is for illustrative purposes only, actual binding, cover or edition may vary.
This is a used book - there is no escaping the fact it has been read by someone else and it will show signs of wear and previous use. Overall we expect it to be in very good condition, but if you are not entirely satisfied please get in touch with us
Trustpilot