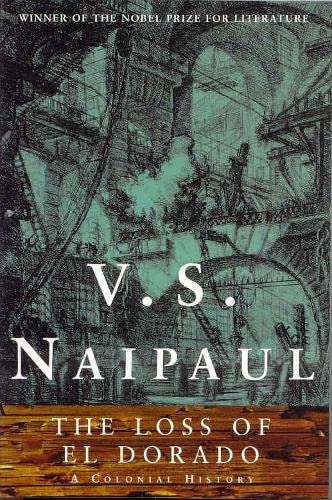 The Loss of El Dorado
by V. S. Naipaul

In Stock
$16.99
inc. GST
A passionate and vivid recreation of the history of Trinidad by the winner of the Nobel Prize in Literature.
Very Good
7 in stock

The Loss of El Dorado Summary

The Loss of El Dorado: A Colonial History by V. S. Naipaul

`What I had known of Trinidad as a child had seemed to me ordinary, unplanned, just there, with nothing like a past. But the past was there: in the schoolyard, below the saman tree, we stood perhaps on the site of Dominique Cert's Bel-Air estate, where in 1803 the slave commandeur or headman, out of a twisted love for his master, had tried to poison the other slaves. More haunting than this was the thought of the vanished aborigines, on whose land and among whose spirits we all lived.'

V.S. Naipaul has gone back more than once to the illuminations of this startling and original book. It is the most human kind of history, done with a novelist's eye. Living characters large and small are rescued from the records and set in a larger, guiding narrative - about the New World, empire, African slavery, revolution - which is never less than gripping.

There are two linked themes: the grinding down of the aborigines during the long rivalries of the foolish El Dorado quest; and then two hundred years later, in the man-made wilderness, the man-made horror of the new slave colony. The Caribbean slave plantations were thought at the time to be more brutal than the American, and this brilliantly researched book, with its accumulation of casual, awful detail, takes us as close as we can get to day-to-day life in the slave colony. Nothing gracious here, in spite of the various titles of nobility; only an opportunist, near-lawless community living on its nerves, always fearful of slave suicide or poison, of African sorcery and revolt, with the infamous Port of Spain jail, and its daily horrors (the planters paid the whipping and torture fees), always in the background, the only protection against chaos.

The Loss of El Dorado Reviews

"History as literature, meticulously researched and masterfully written." -"The New York Times Book Review
""A formidable achievement. . . . No historian has attempted to weave together in so subtle a manner the threads of the most complex and turbulent period of Caribbean history." -"The Times Literary Supplement"
"Brilliant. . . . Startling." -"New Statesman"
"A remarkable book. . . . Intelligent, humane, brilliantly written." -"Book World"

GOR001429743
The Loss of El Dorado: A Colonial History by V. S. Naipaul
V. S. Naipaul
Used - Very Good
Paperback
Pan Macmillan
2001-09-01
400
0330487078
9780330487078
N/A
Book picture is for illustrative purposes only, actual binding, cover or edition may vary.
This is a used book - there is no escaping the fact it has been read by someone else and it will show signs of wear and previous use. Overall we expect it to be in very good condition, but if you are not entirely satisfied please get in touch with us.