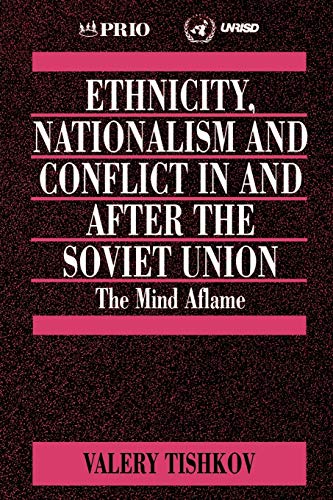 Ethnicity, Nationalism and Conflict in and after the Soviet Union by Valery Tishkov

This analysis of post-Soviet nationalism covers both its hegemonic forms, executed by dominant groups like the Russians, and its periphery forms, subscribed to mainly by ethnic minorities with diminished status. Both constitute a major obstacle to civic nation-building and democratic reform.

Ethnicity, Nationalism and Conflict in and after the Soviet Union: The Mind Aflame by Valery Tishkov

Valery Tishkov is a well-known Russian historian and anthropologist, and former Minister of Nationalities in Yeltsin's government. This book draws on his inside knowledge of major events and extensive primary research.

Tishkov argues that ethnicity has a multifaceted role: it is the most accessible basis for political mobilization; a means of controlling power and resources in a transforming society; and therapy for the great trauma suffered by individuals and groups under previous regimes. This complexity helps explain the contradictory nature and outcomes of public ethnic policies based on a doctrine of ethno-nationalism.

`This book is a great read. It will be a `must' for all those involved in studying contemporary nationalism' - Social Anthropology

`This book is a `must read' for anyone interested in how nationalism and ethnicity contributed to the collapse of the Soviet Union, why it persists today and what can be done to keep it in check' -Nations and Nationalism

`Valery Tishkov's Ethnicity, Nationalism and Conflict in and after the Soviet Union is excellent. This book is among the very best on the subject' - Journal of Contingencies and Crisis Management

`The best book on ethnic relations and nationalism in the Soviet Union and its successor states ever published by a Russian scholar... Tishkov's book is a remarkable achievement and I hope it will attract the serious attention of Western scholars' - Ethnos

`Valery Tishkov has written a theoretically sophisticated, empirically rich, and policy relevant book, certainly one of the best and most complete works that have so far appeared on the theme of ethnicity and nationalism in the last years of the Soviet Union and in the post-Soviet period' - Journal of Ethnic and Migration Studies

`For forty-five years Europe was divided. While a new era has begun, and East and West now engage in constructive issues of politics, economics and security, Europe remains a divided continent...Valery Tishkov manages to bridge the divide. In a style which is never dull and always informative, he outlines the limitations of the conceptual approaches to nationalism which have been adopted by academics in the East and West... Tishkov's criticism is that pseudo-scholarly terms and categories which should never have been placed in any disciplinary discourse have permeated and undermined the work of a generation of academics...Tishkov traces how these events have come to pass by conducting a comprehensive review of the literature and by then placing the scholarly debate within he context of the political events of the late Soviet period...He clearly identifies the situations where mistakes were made, where recommendations could have been more cautious, and where it was impossible to make any other choice than the one which was made. The reader acquires a clear understanding of the events and their causes, as they were perceived at that time. This is an impressive tome. One which should do more than simply adorn a scholar's shelf. It should be read and studied if the academic divide is to be narrowed' - The Ethnic Conflict Research Digest

`Valery Tishkov brings a unique combination of conceptual sophistication, first-hand experience, and wide-ranging knowledge to the task of deciphering ethnic conflict in the former Soviet Union. The result is a major contribution to the understanding of ethnic phenomena. It is theoretically interesting, relevant to policy, and rich in its depictions of antipathy and violence from the Caucasus to Central Asia and beyond. This is a masterful work' - Donald L Horowitz, James B Duke Professor of Law and Political Science, Duke University

`Valery Tishkov's penetrating study of the post-Soviet world of ethnic strife is written by a scholar who has been a prominent participant as well as close observer of the recent developments. I am impressed by the force and insight of his analysis and touched by the intensity of his commitment. Tishkov's impassioned appeal to intellectuals and politicians to desist from the production of confrontational ethnic ideologies goes to the heart of the tragic processes that are underway and is broadly applicable in most parts of the contemporary world' - Fredrik Barth, Professor of Anthropology, University of Oslo

`This book is a great read. It will be a 'must' for all those involved in studying contemporary nationalism.' - Social Anthropology

Valery Tishkov is Professor of History and Anthropology, Director of the Institute of Ethnology and Anthropology, Russian Academy of Sciences, and Senior Research Consultant at the International Peace Research Institute, Oslo (PRIO).
Introduction The Feel of the Game PART ONE: GENERAL APPROACHES AND ISSUES Ethnicity in the Soviet and Post-Soviet Context Soviet Ethnic Engineering Success and Failure Ethno-Politics in a Time of Transition Territories, Resources and Power Cultures and Languages in Conflict PART TWO: CASE STUDIES The Russians are Leaving Central Asia and Kazakhstan The Culture of Ethnic Violence The Osh Conflict The Anatomy of Ethnic Violence The Ingush-Ossetian Conflict Ambition and the Arrogance of Power The Chechen War (Part I) Ambition and the Arrogance of Power The Chechen War (Part II) PART THREE: GOVERNING CONFLICTING ETHNICITY Post-Soviet Nationalism What is Rossia? Identities in Transition Strategies for Ethnic Accord in Post-Soviet States PART FOUR: CONCLUSION: DESTROYING REALITY THROUGH THEORY (OR `BACK TO THE IVORY TOWERS')
GOR006372555
Ethnicity, Nationalism and Conflict in and after the Soviet Union: The Mind Aflame by Valery Tishkov
Valery Tishkov
International Peace Research Institute, Oslo (PRIO)
Used - Very Good
Paperback
SAGE Publications Inc
1996-11-28
352
0761951857
9780761951858
N/A
Book picture is for illustrative purposes only, actual binding, cover or edition may vary.
This is a used book - there is no escaping the fact it has been read by someone else and it will show signs of wear and previous use. Overall we expect it to be in very good condition, but if you are not entirely satisfied please get in touch with us
Trustpilot