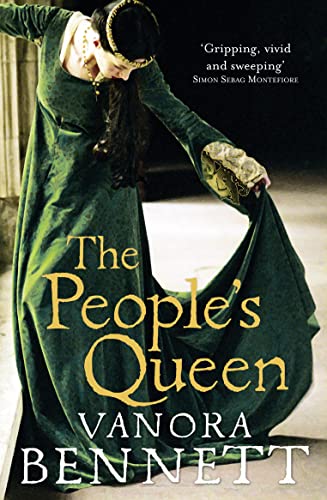 The People's Queen
by Vanora Bennett

The People's Queen by Vanora Bennett

The country is in turmoil, The King is in debt to the City, and the old order had broken down - a time of opportunity indeed, for those who can seize the moment.

The king's mistress, Alice Perrers, becomes the virtual ruler of the country from his sickbed. Disliked and despised by the Black Prince and his cronies, her strong connections to the merchants make her a natural ally for the king's ambitious second son, John of Gaunt.Together they create a powerful position in the city for one of his henchmen, Geoffrey Chaucer.

In this moment of opportunity, Alice throws herself into her new role and the riches that lay before her, but Chaucer, even though her lover and friend, is uneasy over what he can foresee of the conspiracies around them.

At the centre of these troubled times and political unrest stands the remarkable figure of a woman who, having escaped the plague which killed her whole family, is certain she is untouchable, and a man who learns that cleverness and ambition may for him sit too uneasily with decency and honesty.

`Bennett writes thoughtful, well-researched historical fiction, finding connections between past and present without too much silliness or fact-bending, and with plenty of romance. Enormous, in every sense of the word' The Times

`A page-turning story, successfully evoking the atmosphere of intrigue and fear that beset the times'
Daily Mail

'A skilful blend of fact and fiction. [Bennett's] characters, story, and fluid writing style sweep you along in a pageant of medieval life. This is quite simply an excellent read!' Historical Novel Society

`If you want a classier-than-average romantic read, one contender is this fine historical debut, a `Girl with a Pearl Earring'-style tale.'
Sunday Times

Vanora Bennett is a journalist and writer. She lived and worked in Russia for 7 years, writing for Reuters and the LA Times. She has been a foreign correspondent and feature writer and contributed to publications including The Times, the LA Times, the Guardian, the Observer and the Evening Standard. She lives in London with her husband and two sons.

GOR002542698
The People's Queen by Vanora Bennett
Vanora Bennett
Used - Very Good
Paperback
HarperCollins Publishers
2011-02-17
544
0007281951
9780007281954
N/A
Book picture is for illustrative purposes only, actual binding, cover or edition may vary.
This is a used book - there is no escaping the fact it has been read by someone else and it will show signs of wear and previous use. Overall we expect it to be in very good condition, but if you are not entirely satisfied please get in touch with us.