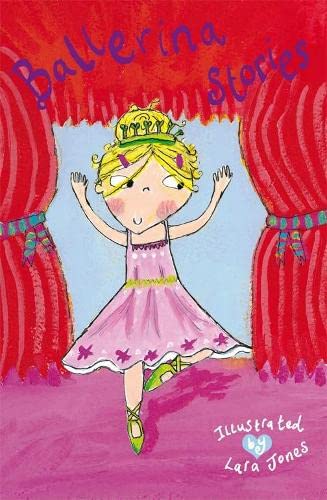 Among the gems featured in this gorgeously graceful collection are Geraldine McCaughrean's classic retelling of The Nutcracker; Fiona Dunbar's quirky modern-day take on the same story, in which Clara struggles to conquer her phobia of mice; a special one-off Nina Fairy Ballerina story about Nina's nerve-frazzling audition to become a pupil at the Royal Academy of Fairy Ballet; the tale of Bunty the ballet-mad walrus (yes, walrus) and a Julia Donaldson Princess Mirrorbelle story featuring some rather special ballet slippers . . .

So whether you've twirled on pointe, danced in a recital or just about mastered first position, BALLERINA STORIES is guaranteed to put the sparkle in your steps!

Author and illustrator Lara Jones, who died in March 2010, was known and admired for her bright, jewel-like colours and her adorable, engaging characters. Lara studied Fine Art at Cheltenham College of Art, where she tackled enormous paintings on a stepladder. In Poppy Cat Lara created a warm and loveable character that children can identify with. Lara's wish was always to recreate in her illustrations the magic and joy of being a child and to capture the essence of a child's delight in discovering new experiences. The enduring appeal of Poppy Cat is testament to Lara's success at portraying these. The Poppy Cat books have sold over 1 million copies worldwide and an animation based on the books is due to be broadcast on Nick Jnr from Spring 2011. Lara won the Sheffield Baby Book Award (Bronze Award) for GOODNIGHT POPPY CAT in 2004, and the Booktrust Early Years Book Award for POPPY CAT'S FARM in 2005. Full of steely determination, Lara was always moving onwards and upwards. She wanted to be challenged and excited by her work and she had started to create a style which, although utterly recognisable as that of the creator of Poppy Cat, had a wonderful freshness and charm. She took a new direction in her first collaboration with the writer Joyce Dunbar, I WANT A MINI TIGER, which was published in 2010. You can find out more about the Poppy Cat TV series on her own website: www.poppycat.com and about Lara at www.larajones.co.uk

GOR000665188
Ballerina Stories by Various
Various
Used - Very Good
Paperback
Pan Macmillan
2007-08-03
352
0330452738
9780330452731
N/A
Book picture is for illustrative purposes only, actual binding, cover or edition may vary.
This is a used book - there is no escaping the fact it has been read by someone else and it will show signs of wear and previous use. Overall we expect it to be in very good condition, but if you are not entirely satisfied please get in touch with us.