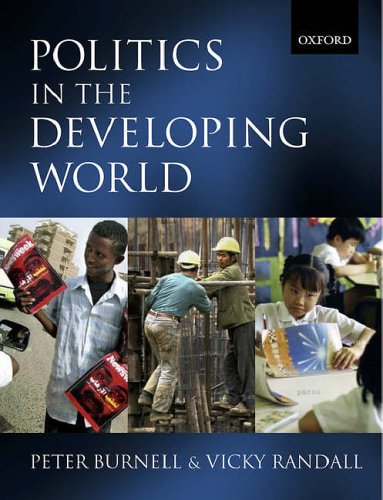 Politics in the Developing World
by Vicky Randall

Politics in the Developing World Summary

Politics in the Developing World by Vicky Randall

The past 10-15 years have seen a transformative change both in the politics of what has conventionally been referred to as the Third World (comprising much of Asia, Africa, Latin and Central America, the Caribbean and the Middle East) and in the way we think about it. "Politics in the Developing World" identifies and analyses these processes of change that are transforming the politics of the Third World, bringing them together in an edited textbook. It deals with central political themes and issues in the developing world, such as globalization, (both economic and cultural, and resistance to this) inequality, identity, religion, the military, democracy, the environment, and policy development. This book brings together leading international experts in the field to provide up-to-date and systematic coverage of the subject. Presented in a user-friendly format and designed especially for students, the book contains useful pedagogical features such as a glossary of key terms, chapter summaries, questions for discussion, chronologies, web links, suggestions for further reading, and boxes highlighting particular issues, events and ideas. The final part of the book contains issues-based comparative case studies on individual countries and the book is fully supported by a companion web site.

Peter Burnell is Professor in the Department of Politics and International Studies at the University of Warwick. He is author or editor of seven books on aspects of Third World Politics, specifically nationalism, international aid and democratization, and founding co-editor of the journal Democratization. He has a specialist knowledge of the politics of Zambia, and he has taught courses including "Democratisation and Development."
Vicky Randall is Professor of Government at the University of Essex. She has taught a course on "Politics in the Developing World" for many years and is co-author of Political Change and Underdevelopment. She is also coeditor of the journal Commonwealth and Comparative Politics. Her other publications have dealt with political parties in the Third World, communications media in Third World politics, and aspects of Indian politics, viewed from a comparative perspective.

GOR002727939
Politics in the Developing World by Vicky Randall
Vicky Randall
Used - Very Good
Paperback
Oxford University Press
2004-11-25
432
0199264422
9780199264421
N/A
Book picture is for illustrative purposes only, actual binding, cover or edition may vary.
This is a used book - there is no escaping the fact it has been read by someone else and it will show signs of wear and previous use. Overall we expect it to be in very good condition, but if you are not entirely satisfied please get in touch with us.