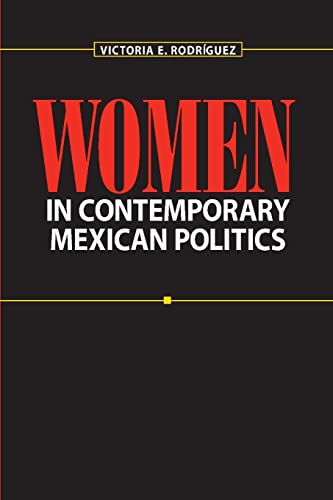 Since the mid-1980s, a dramatic opening in Mexico's political and electoral processes, combined with the growth of a new civic culture, has created unprecedented opportunities for women and other previously repressed or ignored groups to participate in the political life of the nation. In this book, Victoria Rodriguez offers the first comprehensive analysis of how Mexican women have taken advantage of new opportunities to participate in the political process through elected and appointed office, nongovernmental organizations, and grassroots activism.

Drawing on scores of interviews with politically active women conducted since 1994, Rodriguez looks at Mexican women's political participation from a variety of angles. She analyzes the factors that have increased women's political activity: from the women's movement, to the economic crises of the 1980s and 1990s, to increasing democratization, to the victory of Vicente Fox in the 2000 presidential election. She maps out the pathways that women have used to gain access to public life and also the roadblocks that continue to limit women's participation in politics, especially at higher levels of government. And she offers hopeful, yet realistic predictions for women's future participation in the political life of Mexico.

"This is a highly original work. It is the first book-length study which explores the role of women in Mexican politics. Second, it incorporates the exploration of women within the context of democratization in Mexico, thereby expanding its relevance to a larger issue, one which deservedly has received much attention recently. Therefore, this book offers unique insights compared to other analyses of women in politics and consequently will appeal to a broader audience." Roderic Ai Camp, author of Mexico's Mandarins: Crafting a Power Elite for the Twenty-First Century "Victoria Rodriquez's book helps fill a significant gap in the literature... a very enjoyable book that is an important contribution to our understanding of both Mexican politics and women's political participation."--Journal of Latin American Studies, May 2004

Victoria E. Rodriguez is Vice Provost of the University of Texas at Austin and Professor in the Lyndon Baines Johnson School of Public Affairs.

GOR010792530
Women in Contemporary Mexican Politics by Victoria E. Rodriguez
Victoria E. Rodriguez
Used - Very Good
Paperback
University of Texas Press
2003-06-01
344
0292771274
9780292771277
N/A
Book picture is for illustrative purposes only, actual binding, cover or edition may vary.
This is a used book - there is no escaping the fact it has been read by someone else and it will show signs of wear and previous use. Overall we expect it to be in very good condition, but if you are not entirely satisfied please get in touch with us.