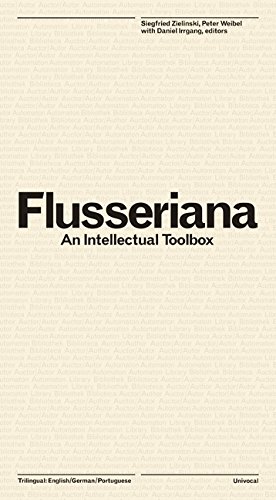 Freestyle thinking-that is Vilem Flusser's intellectual modus operandi: challenging and offensive, paradoxical and audacious. His thought knows no disciplines or subjects nor does it pay tribute to other academic frameworks or rituals. Above all else his thought wants to intervene in ongoing cultural and artistic processes and influence them. In order to achieve this, no closed theoretical systems are necessary-only open, operative structures. The Flusseriana is a toolbox capable of being developed and expanded. It contains more than two hundred "thinkthings" (Denkdinge) of all kinds: particularities like "Indian Summer," "Atlas," "Submissiveness," "Animal," and "Mediterranean Sea"; condensed Flusserian thought concerning the big eternal questions such as "History," "Language," "Myth," and "Religion"; the central concepts of his media analysis including "Apparatus," "Abstraction," "Cybernetics," and "Telematics"; as well as Flusser's own neologisms, "Communicology," "Universe of Dots," and the old and the new "Imaginations." More than one hundred authors produced the entries under these entries in a dialogic practice entirely in the spirit of the philosophical writer from Prague.

Vilem Flusser (1920-1991) was born in Prague; emigrated to Brazil, where he taught philosophy and wrote a daily newspaper column; and later moved to France. Among his many books that have been translated into English are The Shape of Things, Towards a Philosophy of Photography, The Freedom of the Migrant, and Writings (Minnesota, 2004).

Siegfried Zielinski is professor of media theory at the Berlin University of the Arts (UdK Berlin) as well as Michel Foucault Professor of Media Archaeology and Techno-Culture at the European Graduate School in Saas-Fee, Switzerland. He is also director of the Vilem Flusser Archive at the UdK Berlin.

Peter Weibel is an artist, curator, thinker, and teacher. Through the wide spectrum of his work, he is a central figure in European media art. Since 1999 he has been chairman and CEO of the ZKM | Center for Art and Media Karlsruhe, Germany.

Daniel Irrgang is research assistant to Siegfried Zielinski at the Berlin University of the Arts (UdK Berlin), supervisor of the Vilem Flusser Archive at UdK Berlin, and researcher on the projects "Archaeology/Variantology of the Media" and "Forum on the Genealogy of MediaThinking."

NGR9781937561529
9781937561529
1937561526
Flusseriana: An Intellectual Toolbox by Vilem Flusser
Vilem Flusser
Univocal
New
Hardback
Univocal Publishing LLC
2015-10-15
496
N/A
Book picture is for illustrative purposes only, actual binding, cover or edition may vary.
This is a new book - be the first to read this copy. With untouched pages and a perfect binding, your brand new copy is ready to be opened for the first time
Trustpilot