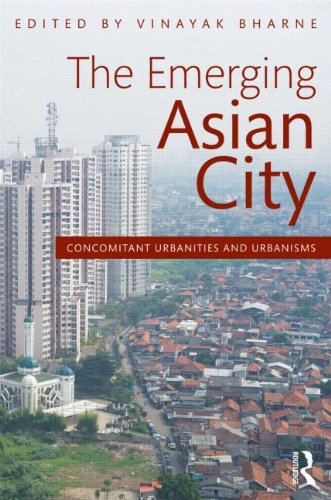 The Asian urban landscape contains nearly half of the planet's inhabitants and more than half of its slum population living in some of its oldest and densest cities. It encompasses some of the world's oldest civilizations and colonizations, and today contains some of the world's fastest growing cities and economies. As such Asian cities create concomitant imagery - polarizations of poverty and wealth, blurred lines between formality and informality, and stark juxtapositions of ancient historic places with shimmering new skylines.

This book embraces the complexity and ambiguity of the Asian urban landscape, and surveys its bewildering array of multifarious urbanities and urbanisms. Twenty-four essays offer scholarly reflections and positions on the complex forces and issues shaping Asian cities today, looking at why Asian cities are different from the West and whether they are treading a different path to their futures. Their combined narrative - spanning from Turkey to Japan and Mongolia to Indonesia - is framed around three sections: Traditions reflects on indigenous urbanisms and historic places, Tensions reflects on the legacies of Asia's East-West dialectic through both colonialism and modernism and Transformations examines Asia's new emerging utopias and urban aspirations.

The book claims that the histories and destinies of cities across various parts of Asia are far too enmeshed to unpack or oversimplify. Avoiding the categorization of Asian cities exclusively by geographic location (south-east, Middle East), or the convenient tagging of the term Asian on selective regional parts of the continent, it takes a broad intellectual view of the Asian urban landscape as a 'both...and' phenomenon; as a series of diverse confluences - geographic, historic and political - extending from the deserts of the Persian Gulf region to the Pearl River Delta. Arguing for Asian cities to be taken seriously on their own terms, this book represents Asia - as a fount of extraordinary knowledge that can challenge our fundamental preconceptions of what cities are and ought to be.

This collection of essays is a major contribution to the literature on comparative urbanism and urban development, specifically in the context of emerging economies of the Asian continent. Written by expert academics and practitioners, it offers insightful, provocative, and engaging discussions of many different aspects of urban planning and design: urban conservation; historic preservation; informal economy; new town development; housing; megaprojects and the like. Like a master artist, Bharne has assembled these fascinating narratives, and woven them in his introductory texts -- for the book and its sections - into a rich tapestry of emerging Asian urbanism. The volume is a must read for students and scholars of architecture and urban design interested in contemporary Asian cities in a comparative perspective. - Tridib Banerjee, Professor and the James Irvine Chair in Urban and Regional Planning, Sol Price School of Public Policy, University of Southern California

This assessment of emerging urban Asia effectively captures its complex histories, present conditions, and willingness to contemplate a future "as a mixed-up result of multiple interventions by multiple groups." Bharne's rich conceptual structure of "traditions, tensions and transformations" organizes chapters by especially thoughtful professionals and academics, challenging us to reconsider our own urban interventions as transformations of an inherited yet dynamic physical/cultural construct. This book should be required reading for the international business community, physical, social, and economic planners, and urbanists and environmentalists concerned about the future of cities in general as well as those in Asia. - Robert S. Harris, FAIA, Hon. ASLA, Emeritus Professor of Architecture, University of Southern California

"The Emerging Asian City... [a] recent and timely contribution to the literature on Asian cities that seek[s] to better understand the diversity, realities and challenges in Asian urbanism and transformation." - Zhu Qian, International Development Planning Review, 35 (3) 2013

About Vinayak Bharne (Sol Price School of Public Policy and School of Architecture at University of Southern California, Los Angeles)

Vinayak Bharne is a joint adjunct faculty at the Sol Price School of Public Policy and School of Architecture at the University of Southern California in Los Angeles, and the director of design at Moule & Polyzoides Architects & Urbanists. He is the co-author of Re-Discovering the Hindu Temple: The Sacred Architecture & Urbanism of India and a contributing author of several books including Planning Los Angeles and Aesthetics of Sustainable Architecture.