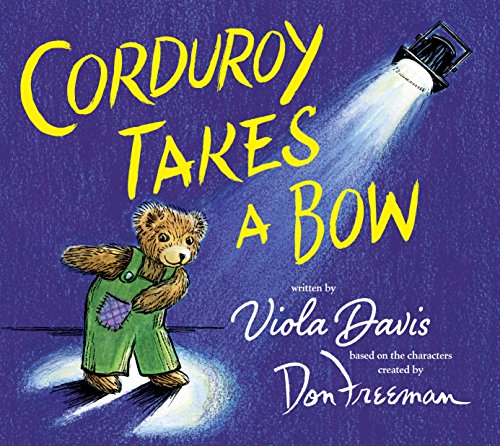 Using her own experiences as a Tony Award-winning Broadway actress, Viola Davis writes the story of Corduroy and Lisa's first trip to the theatre. As usual, Corduroy adventures off on his own, and readers follow his escapades as he explores all over - from the orchestra pit to the costumes rack to the props table and ultimately onto the stage itself, before being reunited with Lisa. A beautifully illustrated tale with a classic feel, sure to spark an interest in theatre in children of any age.

"Perhaps the book's most valuable visual aspect is featuring people of color in all elements of the theater, from Lisa and her mother, of course, to the orchestra pit, stage manager, and actors . . . A sweet story that will have children clamoring to see a show, perhaps with their own bears."
-Kirkus Reviews

"A delightful new act for ever-curious Corduroy--and an entertaining introduction to the theater."
-Booklist

VIOLA DAVIS is a critically revered, award-winning actress of film, television, and theater. She is the first black actress to win Tony (Fences and King Hedley II), Oscar (Fences) and Emmy (How to Get Away with Murder) awards for acting. In 2012, Davis and her husband founded their production company, JuVee Productions, with its focus being on giving a voice to the voiceless through strong, impactful and culturally relevant narratives.

DON FREEMAN (1908 - 1978) was a celebrated children's book author and illustrator. His many popular titles include Corduroy and A Pocket for Corduroy.

JODY WHEELER is the illustrator of over forty books for children. She lives in New York City.

GOR010401744
Corduroy Takes A Bow by Viola Davis
Viola Davis
Used - Like New
Hardback
Viking Books for Young Readers
2018-08-22
32
0425291472
9780425291474
N/A
Book picture is for illustrative purposes only, actual binding, cover or edition may vary.
The book has been read, but looks new. The book cover has no visible wear, and the dust jacket is included if applicable. No missing or damaged pages, no tears, possible very minimal creasing, no underlining or highlighting of text, and no writing in the margins.