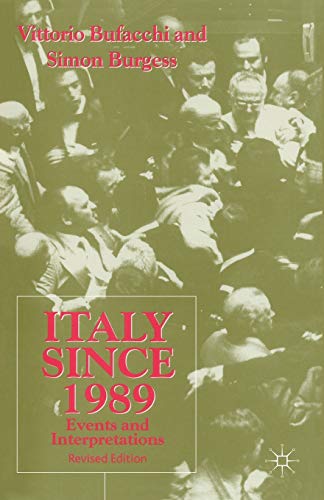 Italy since 1989
by Vittorio Bufacchi

Out of Stock
$20.49
inc. GST
Italy Since 1989 provides the first in-depth, fully documented account in English of the extraordinary last eleven years in Italian politics.
Very Good
Only 0 left

Italy since 1989: Events and Interpretations by Vittorio Bufacchi

Italy Since 1989 provides the first in-depth, fully documented account in English of the extraordinary last eleven years in Italian politics. Bufacchi and Burgess take the transition to a new Italy as their point of departure, and conduct a guided tour through the massive changes that the country has recently undergone with the collapse of the party-state, attempting to explain as well as understand events along the way. The authors provide extensive coverage of the judicial uncovering of bribery and corruption, and the journey culminates in an entirely original examination of the general election of April 1996. This revised edition includes a fresh introductory chapter, bringing up to date the chronicle of events.

Pre-publication Endorsement of the paperback edition

'Italy since 1989 is an extraordinary book, by far the best analysis of the complex development of Italian politics.The authors combine a flexible

theoretical framework with a profound knowledge of the events that are

shaping the Italian political system. The admirable result is a book which

is indispensable for all students and scholars of Italian politics.' - Gianfranco Pasquino, Johns Hopkins University

'...this book is an excellent inquiry into the nature of democracy and democratic development in contemporary Italy.' - Mark Donovan, Modern Italy

GOR005314830
Italy since 1989: Events and Interpretations by Vittorio Bufacchi
Vittorio Bufacchi
Used - Very Good
Paperback
Palgrave Macmillan
1998-03-01
276
0333930711
9780333930717
N/A
Book picture is for illustrative purposes only, actual binding, cover or edition may vary.
This is a used book - there is no escaping the fact it has been read by someone else and it will show signs of wear and previous use. Overall we expect it to be in very good condition, but if you are not entirely satisfied please get in touch with us.