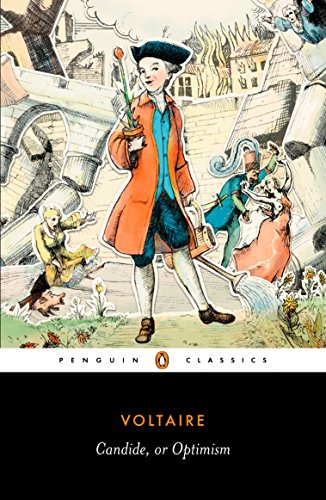 Candide, or Optimism
by Voltaire

In Stock
$15.49
inc. GST
When his love for the Baron's daughter is discovered, Candide is cast out to make his own way in the world. And so he and his companions begin a breathless tour of Europe, South America and Asia, as an outrageous series of disasters befall them earthquakes, syphilis, a brush with the Inquisition, and murder, testing the young hero's optimism.
Very Good
Only 1 left

Candide, or Optimism by Voltaire

In Candide, Voltaire threw down an audacious challenge to the philosophical views of the Enlightenment to create one of the most glorious satires of the eighteenth century. His eponymous hero is an innocent young man whose tutor, Pangloss, has instilled in him the belief that 'all is for the best'. But when his love for the Baron's rosy-cheeked daughter is discovered, Candide is cast out to make his own fortune. As he and his various companions roam over the world, an outrageous series of disasters - earthquakes, syphilis, the Inquisition - sorely test the young hero's optimism, holding a mirror up to all fanatics, zealots and moral reformers of humankind.

Winner of the 2012 Fifty Books/Fifty Covers show, organized by Design Observer in association with AIGA and Designers & Books

"[Penguin Drop Caps] convey a sense of nostalgia for the tactility and aesthetic power of a physical book and for a centuries-old tradition of beautiful lettering."
--Fast Company

"The Penguin Drop Caps series is a great example of the power of design. Why buy these particular classics when there are less expensive, even free editions of Great Expectations? Because they're beautiful objects. Paul Buckley and Jessica Hische's fresh approach to the literary classics reduces the design down to typography and color. Each cover is foil-stamped with a cleverly illustrated letterform that reveals an element of the story. Jane Austen's A (Pride and Prejudice) is formed by opulent peacock feathers and Charlotte Bronte's B (Jane Eyre) is surrounded by flames. The complete set forms a rainbow spectrum prettier than anything else on your bookshelf."
--Rex Bonomelli, The New York Times

Voltaire (1694-1778) French writer, satirist, the embodiment of the 18th-century Enlightenment. Among his best-known works is the satirical short story CANDIDE (1759).

Michael Wood (introducer) is currently Straut Professor of English at Princeton. His books include Stendhal, America in the Movies, The Magician's Doubts, Franz Kafka, and The Road to Delphi. Theo Cuffe (translator) has also translated a selection of Voltaire's short stories for Penguin, Micromegas and Other Short Fictions.

GOR001717113
Candide, or Optimism by Voltaire
Voltaire
Used - Very Good
Paperback
Penguin Books Ltd
2006-05-25
208
0140455108
9780140455106
N/A
Book picture is for illustrative purposes only, actual binding, cover or edition may vary.
This is a used book - there is no escaping the fact it has been read by someone else and it will show signs of wear and previous use. Overall we expect it to be in very good condition, but if you are not entirely satisfied please get in touch with us.