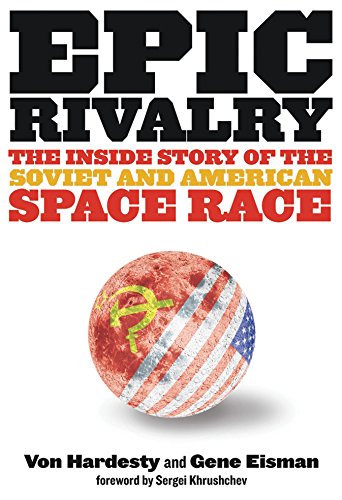 Epic Rivalry: The Inside Story of the Soviet and American Space Race by Von Hardesty

When Neil Armstrong and Buzz Aldrin walked on the moon in 1969, they personified an almost unimaginable feat-the incredibly complex task of sending humans safely to another celestial body. This extraordinary odyssey, which grew from the rivalry between the United States and the Soviet Union during the Cold War, was galvanized by the Sputnik launch in 1957. Written by Smithsonian curator Von Hardesty and researcher Gene Eisman, Epic Rivalry tells the story from both the American and the Russian points of view, and shows how each space-faring nation played a vital role in stimulating the work of the other. Scores of rare, unpublished, and powerful photographs recall the urgency and technical creativity of both nations' efforts. The authors recreate in vivid detail the "parallel universes" of the two space exploration programs, with visionaries Wernher von Braun and Sergei Korolev and political leaders John F. Kennedy and Nikita Khrushchev at the epicenters. The conflict between countries, and the tense drama of their independent progress, unfolds in vivid prose. Approaching its subject from a uniquely balanced perspective, this important new narrative chronicles the epic race to the moon and back as it has never been told before-and captures the interest of casual browsers and science, space, and history enthusiasts alike.

"A balanced, reader-friendly re-creation of the origins, progress, thrills and perils attending a prestigious race, desperately important at the time, only dimly remembered today." --Kirkus

"An engaging story of visionary scientists focused on space travel, pragmatic politicians eager for triumphs in a propaganda war, and heroic astronauts and cosmonauts risking their lives...compelling narrative of the space race as it unfolded." --Science and Spirit Magazine

Von Hardesty is a curator at the Smithsonian National Air and Space Museum. Gene Eisman is an independent historian.

GOR006775246
Epic Rivalry: The Inside Story of the Soviet and American Space Race by Von Hardesty
Von Hardesty
Used - Very Good
Paperback
National Geographic Society
2008-09-16
304
1426203217
9781426203213
N/A
Book picture is for illustrative purposes only, actual binding, cover or edition may vary.
This is a used book - there is no escaping the fact it has been read by someone else and it will show signs of wear and previous use. Overall we expect it to be in very good condition, but if you are not entirely satisfied please get in touch with us.