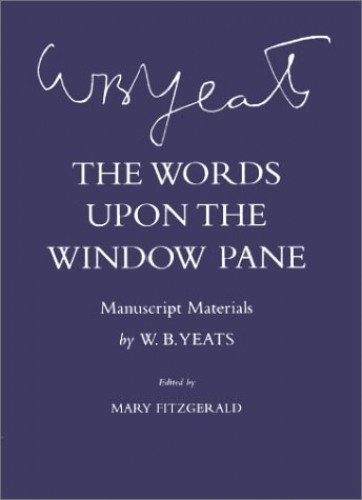 The Words Upon the Windowpane by W. B. Yeats

The Cornell Yeats edition of this play contains transcriptions and photographic reproductions of the drafts with variant readings from proofs, typescripts, and notebook entries, as well as other materials pertaining to its writing and performance.

The Words Upon the Windowpane: Manuscript Materials by W. B. Yeats

From reviews of The Cornell Yeats series:

"For students of Yeats the whole series is bound to become an essential reference source and a stimulus to important critical re-readings of Yeats's major works. In a wider context, the series will also provide an extraordinary and perhaps unique insight into the creative process of a great artists."-Irish Literary Supplement

"I consider the Cornell Yeats one of the most important scholarly projects of our time."-A. Walton Litz, Princeton University, coeditor of The Collected Poems of William Carols Williams and Personae: The Shorter Poems of Ezra Pound

"The most ambitious of the many important projects in current studies of Yeats and perhaps of modern poetry generally.... The list of both general and series editors, as well as prospective preparers of individual volumes, reads like a Who's Who of Yeats textual studies in North America. Further, the project carries the blessing of Yeats's heirs and bespeaks an ongoing commitment from a major university press.... The series will inevitably engender critical studies based on a more solid footing than those of any other modern poet.... Its volumes will be consulted long after gyres of currently fashionable theory have run on."-Yeats Annual (1983)

Words upon the Window Pane, first staged in 1930, is W. B. Yeats's most powerful and brilliant dramatic exploration of the occult, in which he had a lifelong interest, and an affirmation of Anglo-Irish Protestant cultural ascendancy. Written at Lady Gregory's Coole Park estate, it features a seance in which Jonathan Swift's voice is projected through a medium. Like Yeats, Swift was both politician and poet, and taking Swift as his subject allowed Yeats to cloak a political message under personal character.

Quite probably based on an obscure one-act play called Swift and Stella by Charles Edward Lawrence, Lady Gregory's editor, the play is centered on a romantic triangle involving Jonathan Swift and two women, Vanessa and Stella. Yeats's use of a seance as a frame permits him to compare the present with the past by putting twentieth-century Dubliners side by side with Swift's contemporaries.

This volume of the Cornell Yeats contains transcriptions and photographic reproductions of the drafts of Words upon the Window Pane, with variant readings from proofs, typescripts, and notebook entries, as well as other materials pertaining to its writing, publication, and performance.

The late Mary FitzGerald was Professor of English and Associate Vice Chancellor for Academic Affairs at the University of Missouri-St. Louis.

GOR010572063
The Words Upon the Windowpane: Manuscript Materials by W. B. Yeats
W. B. Yeats
The Cornell Yeats
Used - Very Good
Hardback
Cornell University Press
2002-06-27
272
0801440475
9780801440472
N/A
Book picture is for illustrative purposes only, actual binding, cover or edition may vary.
This is a used book - there is no escaping the fact it has been read by someone else and it will show signs of wear and previous use. Overall we expect it to be in very good condition, but if you are not entirely satisfied please get in touch with us
Trustpilot