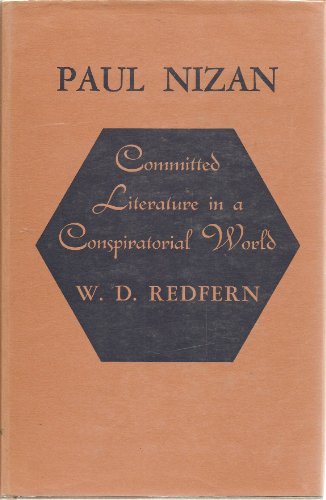 Sartre's friend and sometime rival, Paul Nizan was a prototype of the angry young man. Ideologically a Marxist, politically a Communist, professionally a writer, endowed-Sartre conceded-with a sharper mind and greater literary ability than his own, Nizan diagnosed the ills of French society in the 1930's. His writings, vilified by the Party he left in September 1939, are being rediscovered in France. W. D. Redfern gives now the first full-length appraisal in English of his life and work.

Nizan as a writer and a critical intelligence is seen in Mr. Redfern's analysis of his radical imagination and its deployment in his novels, polemical essays, journalism, and correspondence. His place among his contemporaries is also assessed, Mr. Redfern thus illuminating the political and literary worlds of the philosophical rebels (Berl, Politzer, Friedmann), the Communists and idealists (Aragon, Malraux, Weil) in Paris during the 1920"s and 1930's.

GOR010193672
Paul Nizan: Committed Literature in a Conspiratorial World by W. D. Redfern
W. D. Redfern
Princeton Legacy Library
Used - Well Read
Hardback
Princeton University Press
2019-03-25
244
0691062188
9780691062181
N/A
Book picture is for illustrative purposes only, actual binding, cover or edition may vary.
This is a used book. We do our best to provide good quality books for you to read, but there is no escaping the fact that it has been owned and read by someone else previously. Therefore it will show signs of wear and may be an ex library book.