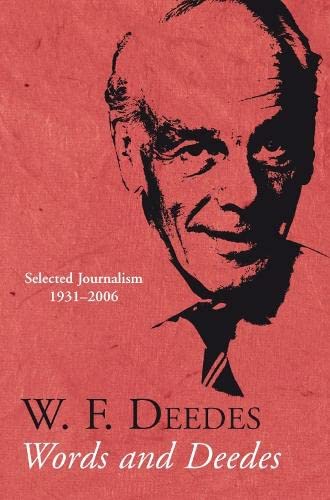 For seventy-five years, W. F. Deedes has reported on the most important events, affairs and issues that have affected Britain, Europe and the World. Words and Deedes brings together a life's work, selecting the very best of his journalism to give a unique overview of the best part of the last century.

Starting as a cub reporter in 1931, Deedes' inimitable eye was cast over the world caught in economic depression and inching closer to another devastating war. Yet, whether describing his campaign to alleviate the hardships of disadvantaged children or the ruthlessness of Mussolini's war machine, Deedes' pieces seem as fresh and vibrant now as they did then. This vivid and immediate style suffuses all his writing, making each story relevant, whether it be recent or more than fifty years old.

This remarkable volume charts a course through some of the most turbulent times the world has ever seen, and yet on every page there is something to enlighten, delight or amuse. With this collection, W. F. Deedes cements his place as one of the very finest journalists of this, or any other century.

W. F. Deedes is the only person ever to have been both a cabinet minister and a national newspaper editor. He was a minister in Harold Macmillan's administration and later became editor of the Daily Telegraph. He is author of Dear Bill: A Memoir, At War with Waugh: The Real Story of Scoop and Brief Lives, a collection of short biographies. He has been writing for the Telegraph for seventy-five years.