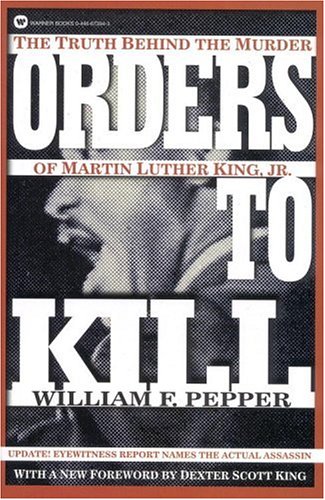 Orders to Kill
by W.F. Pepper

Used Price
$28.49
inc. GST
Free Shipping in Australia
This text presents the evidence and interviews that William F. Pepper revealed in his investigations into the assassination of Martin Luther King Jr. Pepper reveals the truth about James Earl Ray's real role in the killing and exposes a conspiracy wrought by hate and power.
Reviews:
Trustpilot
Very Good

Orders to Kill: Truth Behind the Murder of Martin Luther King by W.F. Pepper

Here is the myth-shattering expose which reveals the truth behind the assassination of Dr. Martin Luther King, Jr.

On April 4th, 1968, Dr. Martin Luther King, Jr. stepped out onto the balcony of the Lorraine Motel in Memphis, Tennessee, and into his killer's line of fire. One shot ended Dr. King's life and forever changed the course of American history -- setting into motion a massive cover-up that has withstood a quarter-century of scrutiny. Now, after 18 years of intensive investigation, William F. Pepper tears away the veil of subterfuge that has hidden the truth of King's death -- proving the innocence of convicted assassin James Earl Ray and revealing the evil conspiracy behind the murder of our nation's greatest civil rights leader.

GOR001673168
Orders to Kill: Truth Behind the Murder of Martin Luther King by W.F. Pepper
W.F. Pepper
Used - Very Good
Paperback
Little, Brown & Company
1998-09-17
558
0446673943
9780446673945
N/A
Book picture is for illustrative purposes only, actual binding, cover or edition may vary.
This is a used book - there is no escaping the fact it has been read by someone else and it will show signs of wear and previous use. Overall we expect it to be in very good condition, but if you are not entirely satisfied please get in touch with us.