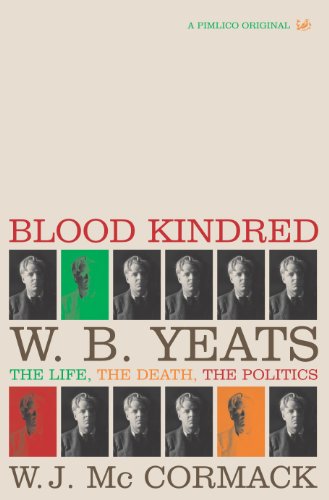 A fascinating and original look at the complex political life of one of the world's most renowned poets.

Blood Kindred: W. B. Yeats, the Life, the Death, the Politics by W. J. McCormack

In June 1934, W. B. Yeats gratefully received the award of a Goethe-Plakette from Oberburgermeister Krebs, four months after his early play The Countess Cathleen had been produced in Frankfurt by SS Untersturmfuhrer Bethge. Four years later, the poet publicly commended Nazi legislation before leaving Dublin to die in southern France. These hitherto neglected, isolated and scandalous details stand at the heart of this reflective study of Yeats's life, his attitudes towards death, and his politics.

Blood Kindred identifies an obsession with family as the link connecting Yeats's late engagement with fascism to his Irish Victorian origins in suburban Dublin and industrializing Ulster. It carefully documents and analyses his involvement with both Maud Gonne and her daughter Iseult, his secretive consultations with Irish army officers during his Senate years, his incidental anti-Semitism, and his approval of the right-wing royalist group L'Action Francaise in the 1920s.

The familiar peaks and troughs of Irish history, such as the 1916 Rising and the death of Parnell, are re-oriented within a radical new interpretation of Yeats's life and thought, his poetry and plays. As far as possible Bill McCormack lets Yeats speak for himself through generous quotation from his newly accessible correspondence. The result is a combative, entertaining biography which allows Ireland's greatest literary figure to be seen in the round for the first time.

This sparkling book concentrates the mind in salutary ways, as well as being the most marvellous company -- Bernard O'Donoghue * Literary Review *
Full of suggestive points derived from a delving into Yeats's family background... well-informed... wide-ranging... very useful and detailed * Irish University Review *
Erudite and well-informed... A troubling, important assessment of Yeats's life and work * Kirkus Reviews *
W. J. McCormack is former Professor of Literary History and head of the English Department at Goldsmith's College, University of London. His publications include A Festschrift for Francis Stuart (1972), Sheridan Le Fanu and Victorian Ireland (1980, 1991 and 1997), Ascendancy and Tradition in Anglo-Irish Literary History (1985), From Burke to Beckett (1993), Fool of the Family: A Life of J. M. Synge (2000) and The Silence of Barbara Synge (2003). He is also the author of a number of volumes of poetry under the name Hugh Maxton.
GOR001422344
Blood Kindred: W. B. Yeats, the Life, the Death, the Politics by W. J. McCormack
W. J. McCormack
Used - Very Good
Paperback
Vintage
2001-01-31
496
0712665145
9780712665148
N/A
Book picture is for illustrative purposes only, actual binding, cover or edition may vary.
This is a used book - there is no escaping the fact it has been read by someone else and it will show signs of wear and previous use. Overall we expect it to be in very good condition, but if you are not entirely satisfied please get in touch with us
Trustpilot