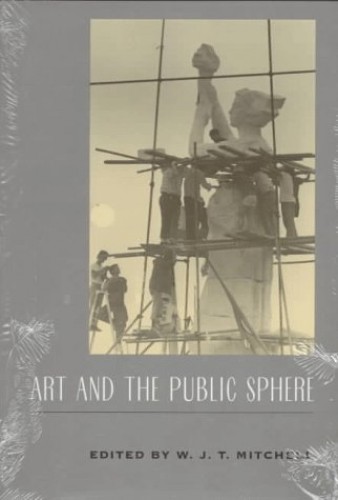 Art and the Public Sphere
by W. J. T. Mitchell

Art and the Public Sphere Summary

Art and the Public Sphere by W. J. T. Mitchell

What is the fate of art in an age of publicity? How has the role of traditional public (i.e., government-owned) art changed in contemporary culture, and how have changing conditions of public space and mass communications altered the whole relationship between art and its potential audiences?
With contributions from the arts, philosophy, criticism, and the law, the thirteen essays in this volume explore the aesthetic, social, and political dynamics that make contemporary public art so controversial, and that that have placed recent art work at the center of public debates.
Contributors include Vito Acconci, "Public Space in a Private Time"; Agnes Denes, "The Dream"; W. J. T. Mitchell, "The Violence of Public Art: "Do the Right Thing""; Ben Nicholson, "Urban Poises"; Michael North, "The Public as Sculpture: From Heavenly City to Mass Ornament"; Barbara Kruger, in an interview with W. J. T. Mitchell; Barbara Hoffman, "Law for Art's Sake in the Public Realm"; Richard Serra, "Art and Censorship"; James E. Young, "The Counter-Monument: Memory Against Itself in Germany Today": Charles Griswold, "The Vietnam Veterans Memorial and the Washington Mall: Philosophical Thoughts on Political Iconography"; John Hallmark Neff, "Daring to Dream"; and David Antin and Virginia Maksymowicz.
Presenting a balance of theoretical and performative essays by both critics and artists, this book will provide deep and discordant analyses of contemporary public art for general readers, as well as students and scholars of art, architecture, and public policy related to the arts.
Most of these articles originally appeared in the journal "Critical Inquiry."

GOR006089741
Art and the Public Sphere by W. J. T. Mitchell
W. J. T. Mitchell
Used - Very Good
Paperback
The University of Chicago Press
1992-12-01
300
0226532119
9780226532110
N/A
Book picture is for illustrative purposes only, actual binding, cover or edition may vary.
This is a used book - there is no escaping the fact it has been read by someone else and it will show signs of wear and previous use. Overall we expect it to be in very good condition, but if you are not entirely satisfied please get in touch with us.