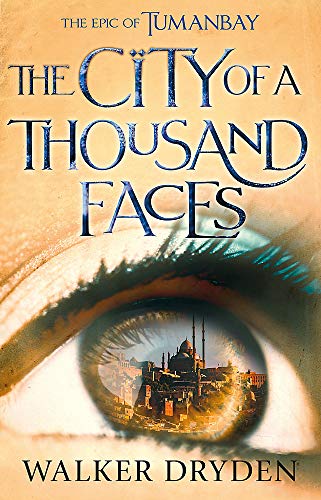 The City of a Thousand Faces
by Walker Dryden

The City of a Thousand Faces Summary

The City of a Thousand Faces: A sweeping historical fantasy saga based on the hit podcast Tumanbay by Walker Dryden

A sweeping historical fantasy saga based on the hit podcast Tumanbay

'Immersive, rich, compelling and populated with characters who come alive on the page, it will transport you to a different world. I loved it and didn't want it to end.' - Sarah Lotz, author of The Three
'An immersive, engaging start.' - SFX

Tumanbay: the most magnificent city on earth. The beating heart of a vast empire. A city of dreams - where those who arrived as slaves now reside in the seat of power.

But the wheel of fate is never still: from the gilded rooftops to the dark catacombs, there are secrets waiting to be uncovered.

For Gregor, Master of the Palace Guard, the work of rooting out spies and traitors is never done. His brother, the great General Qulan, must quell a distant rebellion. Whilst Shajah, chief wife to the Sultan, is suspicious that her new maid Sarah is not who she claims to be.

And a mysterious stranger arrives with a gift for the Sultan himself.

A gift that will change Tumanbay forever...

'The writing and imagery are flawless, taking you right into the heart of the story and characters. While I was reading, this was MY world, and you can't ask for more than that from a fantasy novel.' Reader review (five stars)

Customer Reviews - The City of a Thousand Faces

The City of a Thousand Faces Reviews

Written with the finesse if a master-assassin's dagger... I could not put it down! -- Christian Cameron

Walker Dryden is the pseudonym for writing team Mike Walker and John Scott Dryden.
John Scott Dryden is an award-winning writer and director, best known for his work in audio fiction. He created the popular podcast series, Passenger List, and has written and directed many audio drama series for the BBC.
Mike Walker has written series on the Caesars, Plantagenets, Stuarts and Romanovs for the BBC, along with a number of plays and a thriller, Bad Company.
Over the past few years, the two have worked together to bring to life the world of Tumanbay.

GOR010734174
The City of a Thousand Faces: A sweeping historical fantasy saga based on the hit podcast Tumanbay by Walker Dryden
Walker Dryden
Used - Very Good
Hardback
Orion Publishing Co
2020-02-20
560
1409187012
9781409187011
N/A
Book picture is for illustrative purposes only, actual binding, cover or edition may vary.
This is a used book - there is no escaping the fact it has been read by someone else and it will show signs of wear and previous use. Overall we expect it to be in very good condition, but if you are not entirely satisfied please get in touch with us.