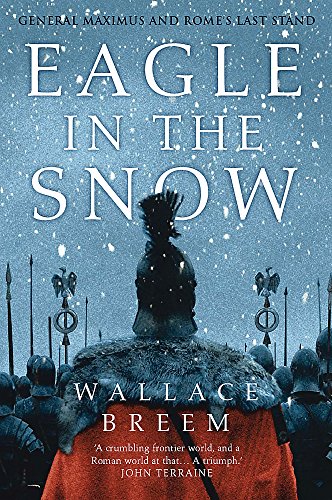 Eagle in the Snow
by Wallace Breem

In Stock
$13.99
+10% GST
A brilliant historical novel, set in the last days of the Roman Empire.
Very Good Good
Only 2 left

Eagle in the Snow Summary

Eagle in the Snow by Wallace Breem

The year is 406. A single Roman legion stands guard on the Rhine. Only these few men, a thin stretch of river and the determination of their general, Maximus, hold the frontier for Rome against the barbarian hordes. Maximus is urged to proclaim himself emperor, but he stands by his concept of duty and holds the frontier for longer than seems possible. Then chance plays a cruel trick . . .

First published in 1970, EAGLE IN THE SNOW is a taut, gripping story of the fall of the Roman Empire in microcosm, as seen through the eyes of Maximus.

'It has the feel of a crumbling frontier world, and a Roman world at that... A triumph.' John Terraine

'This is a magnificent panorama of a splintering civilization, elegaic and deeply moving, its reissue is long overdue.' GOOD BOOK GUIDE

'Wallace Breem belongs to that very short list of writers whose work elevates historical fiction beyond the genre and sets it alongside the best writing of any kind, in any period.' Steven Pressfield

Wallace Breem was born in 1926 and educated at Westminster School. In 1944 he entered the Indian Army Officers' Training School and later joined a crack regiment of the North West Frontier Force. After the war he took a number of temporary jobs, eventually joining the library staff of the Honourable Society of the Inner Temple.

By 1965 he had become the 11th Chief Librarian and Keeper of Manuscripts. He was a founder member of the British and Irish Association of Law Librarians. He served the organisation in a number of senior capacities from 1969 until his death in 1990, when the Association and the Inner Temple jointly set up a Memorial Award in his honour.

GOR001626081
Eagle in the Snow by Wallace Breem
Wallace Breem
Used - Very Good
Hardback
Orion Publishing Co
2003-08-07
368
0297645617
9780297645610
N/A
Book picture is for illustrative purposes only, actual binding, cover or edition may vary.
This is a used book - there is no escaping the fact it has been read by someone else and it will show signs of wear and previous use. Overall we expect it to be in very good condition, but if you are not entirely satisfied please get in touch with us.