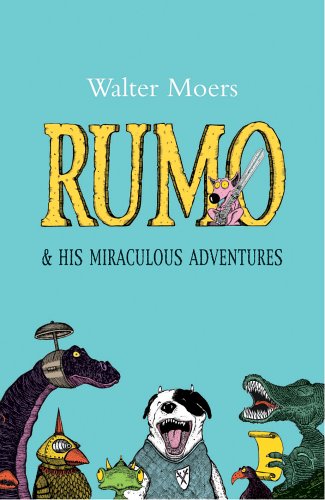 Astonishingly inventive, amusing and engrossing, Rumo is a captivating story from the unique imagination of Walter Moers. Rumo is a little Wolperting who will one day become the greatest hero in the history of Zamonia. Armed with Dandelion, his talking sword, he fights his way across Overworld and Netherworld, two very different worlds chock-full of adventures, dangers, and unforgettable characters: including Rala, the beautiful girl Wolperting who cultivates a hazardous relationship with death; General Ticktock, the evil commander of the Copper Killers; Ushan DeLucca, the finest and most weather-sensitive swordsman in Zamonia; Professor Abdullah Nightingale, inventor of the Chest-of-Drawers Oracle; and, worse luck, the deadly Metal Maiden.

"Moers' creative mind is like J. K. Rowling's on Ecstasy" * Detroit Evening News *
"Moers' writing is alluring, to say the least. He writes with as much detail as he draws, and his vivid imagination is matched by his ability to pace a story and create interesting characters" * The State (South Carolina) *
"Moers' drawings...are fantastic, in both definitions of the word, but what's truly appealing is the world that he creates in this marvelous tale of adventure and self-discovery... It's less a text and more an imagination on paper" * Philadelphia Inquirer *
"Parodic and sincere, slapstick and heart-tugging by turns, Moers's novel has fresh things to say on the nature of heroism and nobility" * Washington Post *

Walter Moers was born in 1957 and is a writer, cartoonist, painter and sculptor. He is the creator of the comic strips The Little Asshole and Adolf and his novels include the cult bestseller The 13 1/2 Lives of Captain Bluebear, The City of Dreaming Books, The Alchemaster's Apprentice and The Labyrinth of Dreaming Books. He lives in Hamburg.

GOR001666218
Rumo by Walter Moers
Walter Moers
Used - Very Good
Paperback
Vintage Publishing
2005-11-03
688
0099472228
9780099472223
N/A
Book picture is for illustrative purposes only, actual binding, cover or edition may vary.
This is a used book - there is no escaping the fact it has been read by someone else and it will show signs of wear and previous use. Overall we expect it to be in very good condition, but if you are not entirely satisfied please get in touch with us.