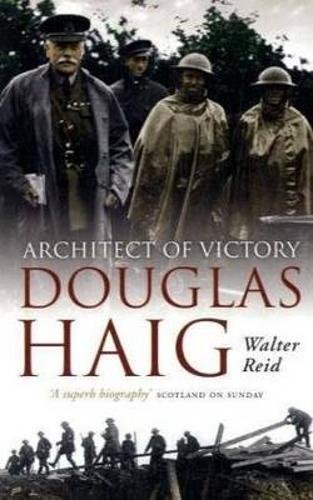 Architect of Victory
by Walter Reid

Douglas Haig's popular image is an unenviable one. Haig masterminded a British-led victory over a continental opponent on a scale that has never been matched before or since. This is his biography that takes into account modern military scholarship. It offers a picture of a comprehensible human being, honourably ambitious, able and intelligent.

Haig masterminded a British-led victory over a continental opponent on a scale that has never been matched before or since. Whereas Wellington commanded forces at Waterloo in which the British were only a minority, in the final stages of the war, Haig controlled a vast British Army, which had grown from a mere six divisions to sixty over the course of the war. The British Army in France in 1918 compromised nearly three million men - only a third less than the population of London, then the largest city in Europe. Contrary to myth, Haig was not a cavalry-obsessed, blinkered conservative, as satirised in Oh! What a Lovely War and Blackadder Goes Forth. Fascinated by technology, he pressed for the use of tanks, enthusiastically embraced air power, and encouraged the use of new techniques involving artillery and machine-guns. Above all, he presided over a change in infantry tactics from almost total reliance on the rifle towards all-arms, multi-weapons techniques that formed the basis of British army tactics until the 1970s. Prior re-evaluations of Haig's achievements have largely been limited to monographs and specialist writings.
Walter Reid has written the first biography of Haig that takes into account modern military scholarship, giving a more rounded picture of the private man than has previously been available. What emerges is a picture of a comprehensible human being, not necessarily particularly likeable, but honourably ambitious, able and intelligent, and the man more than any other responsible for delivering victory in 1918.

'Walter Reid's account of one of the most controversial figures in modern British history is both fair and just, two achievements that have eluded many writers on Douglas Haig. He has the historian's eye, which can see the significance of the apparently inconsequential'

'A biography that is not just academically credible but which is also a very good read. I shall be very surprised if it does not sell'

Walter Reid was educated at Oxford University, where he read history, and Edinburgh University. He is based in the west of Scotland, but spends part of the year in France. His earlier book, To Arras 1917, is in part a poignant memoir of a young officer who died of wounds sustained in the Battle of Arras, in part an exploration of the influences that formed him and so many others for service and death on the Western Front.

GOR002352925
Architect of Victory: Douglas Haig by Walter Reid
Walter Reid
Used - Very Good
Paperback
Birlinn General
2009-09-18
496
1843410451
9781843410454
N/A
Book picture is for illustrative purposes only, actual binding, cover or edition may vary.
This is a used book - there is no escaping the fact it has been read by someone else and it will show signs of wear and previous use. Overall we expect it to be in very good condition, but if you are not entirely satisfied please get in touch with us.