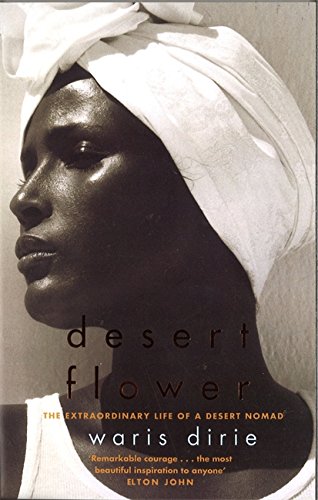 Used Price
$16.99
inc. GST
Free Shipping in Australia
* Inspirational, dramatic and extraordinary - the autobiography of a Somalian nomad circumcised at 5, sold in marriage at 13, who became an American model and is now at the young age of 30, the UN spokeswoman against circumcision
Reviews:
Trustpilot
Very Good Good Well Read

Waris Dirie (the name means desert flower) lives a double life - by day she is a famous model and UN spokeswoman on women's rights in Africa, at night she dreams of her native Somalia. Waris, one of 12 children, was born into a traditional family of desert nomads in East Africa. She remembers her early childhood as carefree- racing camels and moving on with her family to the next grazing spot - until it came her turn to meet the old woman who administered the ancient custom imposed on most Somalian girls: circumcision. Waris suffered this torture when she was just five years old. Then, aged 12, when her father attempted to arrange a marriage with a 60 year old stranger in exchange for five camels - she took flight. After an extraordinary escape through the dangerous desert she made her way to London and worked as a maid for the Somalian ambassador until that family returned home. Penniless and speaking little English, she became a janitor in McDonalds where she was famously discovered by a fashion photographer. Her story is a truly inspirational and extraordinary self-portrait of a remarkable woman whose spirit is as breathtaking as her beauty.

Waris's story is one of remarkable courage. From the deserts of Somalia to the world of high fashion ... she emerges a real champion. She is the most beautiful inspiration to anyone * ELTON JOHN *
A story that traverses continents, spans worlds of human experience and human pain ... Waris Dirie was a victim once, but she never will be again * EXPRESS *
She was circumcised at five, fled an arranged marriage at 12, then became a Pirelli girl in her teens. Now, at twenty-eight, Waris Dirie is an ambassador for the UN. Her mission? To rid Africa of its most barbaric ritual * OBSERVER *
Dirie's story is an extraordinary one. * SUNDAY TIMES *

Waris Dirie is an internationally renowned model and face of Revlon skincare products. She was appointed by the United Nations in 1997 as a special ambassador for women's rights to eliminate the practice of female genital mutilation. She lives in New York with her boyfriend and their son.

GOR001224339
Desert Flower by Waris Dirie
Waris Dirie
Used - Very Good
Paperback
Little, Brown Book Group
2000-01-01
256
1860497586
9781860497582
N/A
Book picture is for illustrative purposes only, actual binding, cover or edition may vary.
This is a used book - there is no escaping the fact it has been read by someone else and it will show signs of wear and previous use. Overall we expect it to be in very good condition, but if you are not entirely satisfied please get in touch with us.