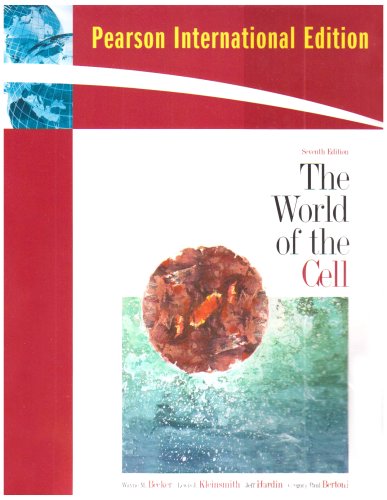 The World of the Cell by Wayne M. Becker

The World of the Cell: International Edition by Wayne M. Becker

The new edition features information on Micro RNAis, other modern molecular techniques, and recent research advances without overwhelming students in detail. The World of the Cell's trademark features-art that teaches, Multi-level Problem Sets, and Concept Statements-have been augmented with new, time-saving study tools and "Mini-captions" for selected figures.

Wayne M. Becker taught cell biology at the University of Wisconsin, Madison until his recent retirement. His interest in textbook writing grew out of notes, outlines, and problem sets that he assembled for his students, culminating in Energy and the Living Cell, a paperback text on bioenergetics published in 1977, and The World of the Cell, the first edition of which appeared in 1986. He earned all his degrees at the University of Wisconsin, Madison. All three degrees are in biochemistry, an orientation that is readily discernible in his textbooks. His research interests have been in plant molecular biology, focused specifically on the regulation of the expression of genes that encode enzymes of the photorespiratory pathway. His interests in teaching, learning, and research have taken him on sabbatical leaves at Harvard University, Edinburgh University, the University of Indonesia, the University of Puerto Rico, Canterbury University in Christchurch, New Zealand, and the Chinese University of Hong Kong. His honors include a Guggenheim Fellowship, a Chancellor's Award for Distinguished Teaching, and a Visiting Scholar Award from the Royal Society of London.

Lewis J. Kleinsmith is an Arthur F. Thurnau Professor Emeritus of Molecular, Cellular, and Developmental biology at the University of Michigan, where he has served on the faculty since receiving his Ph.D. from Rockefeller University in 1968. His teaching experiences have involved courses in introductory biology, cell biology, and cancer biology, and his research interests have included studies of growth control in cancer cells, the role of protein phosphorylation in eukaryotic gene regulation, and the control of gene expression during development. Among his numerous publications, he is the author of Principles of Cell and Molecular Biology, first published in 1988, and several award-winning educational software programs. His honors include a Guggenheim Fellowship, the Henry Russell Award, a Michigan Distinguished Service Award, citations for outstanding teaching from the Michigan Students Association, a Thurnau Professorship, an NIH Plain Language Award, and a Best Curriculum Innovation Award from the EDUCOM Higher Education Software Awards Competition.

Jeff Hardin is a Professor in the Zoology Department at the University of Wisconsin-Madison. His research interests center on how cells migrate and adhere to one another to change the shape of animal embryos. Dr. Hardin's teaching is enhanced by his extensive use of video-microscopy and his Web-based teaching materials, which are used on many campuses in the United States and other countries. As part of his interest in teaching biology, Dr. Hardin has been involved in several teaching initiatives, including being a founding member of the University of Wisconsin system-wide instructional technology initiative known as BioWeb. He is currently faculty director of the Biology Core Curriculum, a four-semester honors biology sequence for undergraduates. His teaching awards include a Lily Teaching Fellowship and a National Science Foundation Young Investigator Award.

Gregory Paul Bertoni, the newest member of the author team, has been active in teaching and research for over 20 years. He earned a Ph.D. in Cellular and Molecular Biology from the University of Wisconsin-Madison, where his teaching experiences included introductory and graduate-level biochemistry, sophomore cell biology, and plant physiology. He also helped to develop a new course entitled "Ways of Knowing" designed to introduce entering freshmen to the learning process itself. His published research includes studies in bacterial pathogenesis, plant-microbe interactions, and plant gene expression. He is currently teaching biology and medical microbiology at Columbus State Community College in Columbus, Ohio, where he has just been nominated for a Distinguished Teaching Award. In addition, Dr. Bertoni is a freelance scientific writer who has contributed to text- and web-based projects in biology, physics, and microbiology. He is also a science editor for The Plant Cell, a leading research journal in plant biology and molecular biology.

1. A Preview of the Cell

2. The Chemistry of the Cell

3. The Macromolecules of the Cell

5. Bioenergetics: The Flow of Energy in the Cell

6. Enzymes: The Catalysts of Life

7. Membranes: Their Structure, Function, and Chemistry

12. The Endomembrane System and Peroxisomes

13. Signal Transduction Mechanisms: I. Electrical and Synaptic Signaling in Neurons

17. Beyond the Cell: Cell Adhesion, Cell Junctions, and Extracellular Structures

18. The Structural Basis of Cellular Information: DNA, Chromosomes, and the Nucleus

21. Gene Expression: I. The Genetic Code and Transcription

23. The Regulation of Gene Expression

Appendix Principles and Techniques of Microscopy

GOR010706748
9780321554185
0321554183
The World of the Cell: International Edition by Wayne M. Becker
Wayne M. Becker
Used - Like New
Hardback
Pearson Education (US)
2008-04-03
912
N/A
Book picture is for illustrative purposes only, actual binding, cover or edition may vary.
The book has been read, but looks new. The book cover has no visible wear, and the dust jacket is included if applicable. No missing or damaged pages, no tears, possible very minimal creasing, no underlining or highlighting of text, and no writing in the margins
Trustpilot