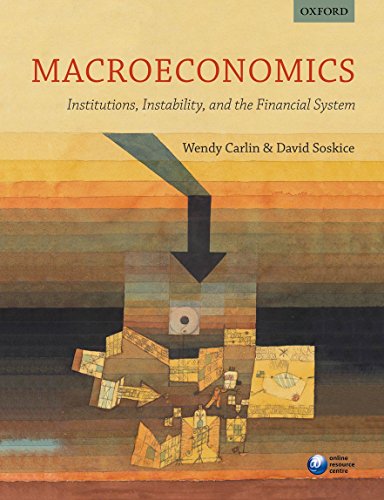 In Stock
$76.99
inc. GST
Carlin and Soskice integrate the financial system with a model of the macro-economy. In doing this, they take account of the gaps in the mainstream model exposed by the financial crisis and the Eurozone crisis. This equips the reader with a realistic modelling framework to analyse the economy both in crisis times and in periods of stability.
Very Good
Only 1 left

This authoritative new textbook integrates the modern monetary framework, based on the 3-equation model of the demand side, the supply side and the policy maker, with a model of the financial system. As a result, the authors comprehensively address the limitations of the mainstream macroeconomic model exposed by the financial crisis and the Eurozone crisis. The book guides the reader through the three principal steps required to integrate the financial system within the macroeconomic model. Firstly, the authors examine how the margin of the lending rate over the policy rate is set in the commercial banking sector, how money is created in a modern banking system and how the central bank can take account of the working of the banking system in order to achieve its desired policy outcome. Secondly, the authors explore the characteristics of the financial system that result in vulnerability to a financial crisis, with implications for fiscal balance. The economy depends on the continuity of core banking services and governments cannot afford to let them fail. This means that important banks do not bear the full cost of their lending decisions. As a result, they may have an incentive to take on excessive risk. Thirdly, a simple model is developed of the behaviour of highly-leveraged financial institutions as the basis for a leverage or financial cycle in the economy. In addition, the book extends the 3-equation model to the open economy and uses a simple 2-bloc version of the 3-equation model to introduce global imbalances. The case of a common currency area is handled within the core model - both at the Eurozone level and at the level of member countries. Every chapter emphasises how the different actors in the economy behave and interact: what are they trying to achieve and what limits their ability to put their intentions into practice? This is extended to the modelling of growth, where the role of innovation rents in the Schumpeterian model is highlighted. It is essential that students understand previous periods of growth, stability and crisis in preparing for future shocks. With this in mind, the book enables the reader to interpret long run historical data and to compare institutional detail in different eras and across the world. Consequently, this text not only develops the critical thinking skills required for academic success, but ensures the reader can analyse data, trends, and policy debates with the confidence necessary for a career in economics or finance. As a result, it is essential reading for all those interested in learning more about the current macroeconomic system and the role played by financial institutions. Online Resource Centre: For students: Conduct a range of exercises with the closed and open economy versions of the model using the Excel-based macroeconomic simulator. Develop your understanding with additional technical material available in the accompanying web appendices. For registered lecturers: Access the solutions to end of chapter questions from the book.

This new book is almost enough to make me wish I was still teaching Macroeconomics. It gives finance the position in macro that recent events suggest it deserves * Simon Wren-Lewis professor at Oxford University and a Fellow of Merton College. *
Carlin and Soskice have produced a gem of a book. The teaching of macroeconomics after the crisis has changed surprisingly little, limiting itself to incorporating 'frictions' into otherwise standard models that failed during the crisis. Carlin and Soskice embark on a much more ambitious venture. They show how the financial cycle and macroeconomics are inextricably linked, with the risk-taking channel as the linchpin. Their exposition is refreshingly original and yet lucid and accessible. This book will appeal to serious students of economics and to all inquiring minds who have wondered about the role of the financial cycle in macroeconomics. * Hyun Song Shin, Economic Adviser and Head of Research, Bank for International Settlements and Hughes-Rogers Professor of Economics, Princeton University *
This is, I believe, the first macro-economic textbook effectively to incorporate the lessons of the Great Financial Crisis and to describe how financial frictions can impact the macro-economy. The authors weave together the old mainstream, three equation, model with the newer account of potential financial disturbances in a lucid and efficient manner. As such, it has a major advantage over almost all other extant textbooks, and will be a boon not only for undergraduates, but also for graduates and those wishing to understand the current working of our macro-economic system, beset as it has been with financial strains. * Professor Charles Goodhart, Director of the Financial Regulation Research Programme, The London School of Economics and Political Science *
This illuminating book introduces the reader to macroeconomics in a revolutionary fashion. Namely, by means of very elegant and accessible models that are always based on sound microfoundations and developed against a narrative of the performance and policy regimes of the advanced economies over the post war period. Unlike most other macro textbooks, this book builds on the most recent research and debates to teach macroeconomics the way it should now be taught: by emphasizing the interplay between macro and finance; by linking growth to innovation, market structure and firm dynamics; and more generally by taking institutions seriously into account when looking at growth, business cycles, and unemployment and the interplay between them. This book is an absolute must read for students and policy makers, even those with little initial background, who need to be fully acquainted with modern macroeconomics. * Philippe Aghion, Robert C. Waggoner Professor of Economics, Harvard *
This is an exciting new textbook. It offers a clear and cogent framework for understanding not only the traditional macroeconomic issues of business cycles, inflation and growth, but also the financial crisis and ensuing Great Recession that have recently shaken the world economy. The paradigm it offers is highly accessible to undergraduates. Yet at the same time it is consistent with what goes on at the frontiers of the field. Overall, the book confirms my belief that macroeconomics is alive and well! * Mark Gertler, Henry and Lucy Moses Professor of Economics, New York University *
To be relevant, economics need to help society understand those phenomena which do it greatest harm - unemployment, inflation and deflation, financial instability, fiscal and banking crisis. Pre-crisis, mainstream economic models failed that societal test and therefore failed society. Wendy Carlin and David Soskice's important new book is the first step towards redemption, providing students and scholars with a rigorous but accessible framework for understanding what troubles society most. * Andrew G Haldane, Chief Economist, Bank of England *
The Carlin and Soskice book does a wonderful job of covering the economics behind macroeconomics and the financial system, alongside presenting the latest research on this and the drivers of the great recession. It also has an impressive array of data and examples woven in with theory explained in a beautifully intuitive way. For any student interested in a refreshingly modern take on the financial crisis and the economics that underlie this, this book is invaluable. * Nicholas Bloom, Professor of Economics, Stanford University *
One of the first macro textbooks to integrate the lessons of the crisis. An elegant bridge between introductory undergraduate and graduate macro texts * Olivier Blanchard, Chief Economist, IMF, and Professor of Economics, MIT *
In the light of the events of the past decade, it is important that a new macroeconomics text attempts to satisfy the demands of those learning and using macroeconomics to be able to access relatively simple models which reflect the ways in which the financial sector interacts with the real economy. This is by no means an easy task. The new Carlin and Soskice book represents a significant step forward in this regard. Consequently undergraduates, post-graduates and their teachers should be grateful that they can now access teaching materials which have something useful to say about the financial crisis. * Professor Stephen Nickell, CBE, FBA. Honorary Fellow of Nuffield College, Oxford *

1. The demand side ; 2. The supply side ; 3. The 3-equation model and macroeconomic policy ; 4. Expectations ; 5. Money, banking and the macro-economy ; 6. The financial sector and crises ; 7. The global financial crisis: applying the models ; 8. Growth, fluctuations and innovation ; 9. The 3-equation model in the open economy ; 10. The open economy: the demand and supply sides ; 11. Extending the open economy model: oil shocks and imbalances ; 12. The Eurozone ; 13. Monetary policy ; 14. Fiscal policy ; 15. Supply-side policy, institutions and unemployment ; 16. Real Business Cycle and New Keynesian models

GOR006968769
Macroeconomics: Institutions, Instability, and the Financial System by Wendy Carlin (Professor of Economics, University College London)
Wendy Carlin (Professor of Economics, University College London)
Used - Very Good
Paperback
Oxford University Press
2014-11-20
680
0199655790
9780199655793
N/A
Book picture is for illustrative purposes only, actual binding, cover or edition may vary.
This is a used book - there is no escaping the fact it has been read by someone else and it will show signs of wear and previous use. Overall we expect it to be in very good condition, but if you are not entirely satisfied please get in touch with us.