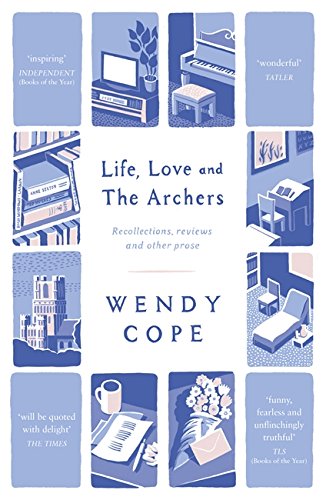 Life, Love and The Archers by Wendy Cope

A book for anyone who's ever fallen in love, tried to give up smoking, or consoled themselves that they'll never be quite as old as Mick Jagger.
'funny, fearless and unflinchingly truthful' Times Literary Supplement - Books of the Years 2014
'thought-provoking and inspiring' Independent on Sunday - Books of the Year 2014

Life, Love and The Archers: recollections, reviews and other prose by Wendy Cope

Wendy Cope has long been one of the nation's best-loved poets, with her sharp eye for human foibles and wry sense of humour. For the first time, Life, Love and the Archers brings together the best of her prose - recollections, reviews and essays from the light-hearted to the serious, taken from a lifetime of published and unpublished work, and all with Cope's lightness of touch.
Here readers can meet the Enid-Blyton-obsessed schoolgirl, the ambivalent daughter, the amused teacher, the sensitive journalist, the cynical romantic and the sardonic television critic, as well as touching on books and writers who have informed a lifetime of reading and writing.
Wendy Cope is a master of the one-liner as well as the couplet, the telling review as well as the sonnet, and Life, Love and the Archers gives us a wonderfully entertaining and unforgettable portrait of one of England's favourite writers.

funny, fearless and unflinchingly truthful * Times Literary Supplement - Books of the Years 2014 *
thought-provoking and inspiring * Independent on Sunday - Books of the Year 2014 *
delightful... Behind her fluid style and droll wit emerges a woman who was in analysis five times a week for ten years, and who wondered what she was doing wrong when she read about single women enjoying their freedom with the company of supportive friends. A marvellously honest and entertaining compilation of her wonderful writing. * Daily Mail (Must Reads) *
entertaining and moving, with appeal far beyond stalwart Cope fans... Life, Love and The Archers begins poignantly with hints of humour ... with the final section prompting several mortifying laugh-out-loud-on-public-transport incidents * Independent on Sunday *
This anthology of prose from Britain's best-loved poet is wonderful, wistful and has some wisecracking one-liners * Tatler *
This collection of her prose reveals a more serious Wendy Cope... What holds the book together is an unflinching honesty - about her depression, her finances, her love life. And, most of all, about poetry... Cope's truth-telling about her own life may disturb some admirers, but the occasional bleakness is warmed and illuminated by shafts of comic sunlight... Is it any wonder that so many of us love her? -- Francis Wheen * Mail on Sunday *
A wonderful mix of poet Wendy Cope's prose, uncovered from the archives of The British Library. Find hidden gems such as extracts from an abandoned memoir and unpublished essays Billy Graham, smoking addiction and more. The book also comprises published prose, including a hilarious collection of TV reviews written for the Spectator in the 80s. Perfect to dip into over the holidays. * Mumsnet *
In the end, as she says ruefully, "What will survive of us will be quoted out of context." But at least Wendy Cope will be quoted with delight * The Times *
a sort of autobiography in fragments. She is as uncompromising here in her insistence on telling the truth; the honesty about her love life that marks her poetry finds a corresponding honesty about the practical business of life... It is remarkable how much Cope writes, often to comic effect, about time-killing pursuits which free us of anxiety - darts, sudoku, comfort eating, even, as the book's title suggests, listening to the Archers. * Times Literary Supplement *
Her writing is always witty and insightful * Good Housekeeping - Best non-fiction book of the month, December 2014 *
Poet Wendy Cope's first book of prose is like an extended conversation with an old friend. You find a huge amount in common, laugh every five minutes, enjoy a good moan and end up counting your blessings; not least among them the joyous fact that "we'll never be as old as Mick Jagger"... Irreverent, sensible, with a keen eye for the absurd and the pretentious, Cope is a boon companion * The Oldie *
The no-nonsense honesty, sharp insight and humour of her poetry are evident in her prose too, as is the deceptive simplicity of her language: never overwrought, it has a thoughtful precision and unselfconscious elegance... The writer's life ... is portrayed with her signature blend of self-deprecation and wit * The Lady *
It is, very often, wonderful... the latter parts of this book are joyous * The Tablet *
A pleasure to read. The writing is crisp and to the point, eloquent but not flowery. Cope never patronises her readers: she trusts them to understand, to think about what she is saying: the pieces are thought-provoking and genuinely relevant in today's world. * Bookbag *
[A] highly enjoyable collection . . . Cope fans and poetry lovers will find much to relish here, as will the general reader * The Good Book Guide *
Wendy Cope read history at Oxford and then worked for 15 years as a London primary school teacher. Her first book of poems, Making Cocoa for Kingsley Amis, was published in 1986. Since then she has been a freelance writer. Her most recent book of poems is Family Values, published in 2011. She lives in Ely.
GOR006535423
Life, Love and The Archers: recollections, reviews and other prose by Wendy Cope
Wendy Cope
Used - Very Good
Paperback
Hodder & Stoughton General Division
2015-04-09
320
1444795384
9781444795387
N/A
Book picture is for illustrative purposes only, actual binding, cover or edition may vary.
This is a used book - there is no escaping the fact it has been read by someone else and it will show signs of wear and previous use. Overall we expect it to be in very good condition, but if you are not entirely satisfied please get in touch with us
Trustpilot