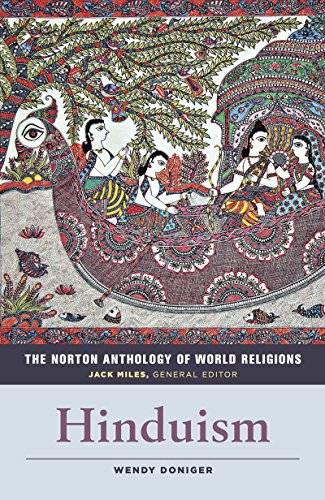 In Stock
$59.99
inc. GST
This groundbreaking new Norton Anthology enables the six major, living, international world religions to speak to students in their own words.
Very Good
Only 1 left

The Norton Anthology of World Religions: Hinduism by Wendy Doniger (University of Chicago)

This magisterial Norton Anthology, edited by world-renowned scholars, offers a portable library of more than 1,000 primary texts from the world's major religions. To help readers encounter strikingly unfamiliar texts with pleasure; accessible introductions, headnotes, annotations, pronouncing glossaries, maps, illustrations and chronologies are provided. For readers of any religion or none, The Norton Anthology of World Religions opens new worlds that, as Miles writes, invite us "to see others with a measure of openness, empathy, and good will..."

Unprecedented in scope and approach, The Norton Anthology of World Religions: Hinduism brings together over 300 texts from 1500 B.C.E. to the present, organised chronologically and by region. The volume features Jack Miles's illuminating General Introduction-"How the West Learned to Compare Religions"-as well as Wendy Doniger's "The Zen Diagram of Hinduism," a lively primer on the history of Hinduism in relation to geography, language, gender, sexuality, class, folk traditions and the politics of empire.

About Wendy Doniger (University of Chicago)

Wendy Doniger (Ph.D. Harvard University) is Mircea Eliade Distinguished Service Professor of the History of Religions at the University of Chicago. She first trained as a dancer under George Balanchine and Martha Graham and then went on to complete two doctorates in Sanskrit and Indian Studies (from Harvard and Oxford). She has taught at Harvard, Oxford, the School of Oriental and African Studies at the University of London, and the University of California at Berkeley. In 1984 she was elected president of the American Academy of Religion, in 1989 a fellow of the American Academy of Arts and Sciences, in 1996 a member of the American Philosophical Society, and in 1997 president of the Association for Asian Studies. She has been awarded seven honorary degrees, and her book The Hindus: An Alternative History was a finalist for the National Book Critics Circle Award. Jack Miles is Distinguished Professor Emeritus of English and Religious Studies with the University of California at Irvine and Senior Fellow for Religious Affairs with the Pacific Council on International Policy. He spent 1960-1970 as a Jesuit seminarian, studying at the Pontifical Gregorian University in Rome and the Hebrew University in Jerusalem before enrolling at Harvard University, where he completed a Ph.D. in Near Eastern languages in 1971. His book God: A Biography won a Pulitzer Prize in 1996. Its sequel Christ: A Crisis in the Life of God led to his being named a MacArthur Fellow for 2003-2007. The third in this trilogy, God in the Qur'an, was published in 2018. Miles is general editor of The Norton Anthology of World Religions and, most recently, the author of Religion As We Know It: An Origin Story.

GOR010738737
The Norton Anthology of World Religions: Hinduism by Wendy Doniger (University of Chicago)
Wendy Doniger (University of Chicago)
Used - Very Good
Paperback
WW Norton & Co
2015-02-20
784
0393912574
9780393912579
N/A
Book picture is for illustrative purposes only, actual binding, cover or edition may vary.
This is a used book - there is no escaping the fact it has been read by someone else and it will show signs of wear and previous use. Overall we expect it to be in very good condition, but if you are not entirely satisfied please get in touch with us.