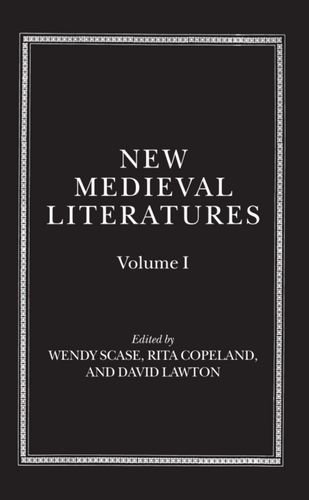 Used Price
$24.49
inc. GST
Free Shipping in Australia
New Medieval Literatures is the first issue of a new annual of work on literature and culture in medieval Europe. As well as featuring exciting new essays that interpret medieval texts for a postmodern age, every volume will include a survey by a leading medievalist of recent work in an emerging field of study. The essays in NML 1 question the concept of the medieval text itself.
Very Good

New Medieval Literatures is a new annual of work on medieval textural cultures. It will provide a regular venue for innovative essays that deploy diverse methodologies - theoretical, archival, philological, and historicist - with an awareness of postmodernism. As well as featuring challenging new articles, each issue will include an analytical survey by a leading international medievalist of recent work in an emerging or dominant critical discourse. The editors, active in three continents and supported by a distinguished multidisciplinary Advisory Board, aim to engage with intellectual and cultural pluralism in the Middle Ages and now. The first volume, New Medieval Literatures 1, presents essays that destabilize the medieval text as a critical category. Interrogating period and literary boundaries, the contributors invoke bordercountry narratives, performance texts, self-consuming writing, and post-medievalist readers as they explore some of the most crucial topics in contemporary literary studies. Subjects discussed include vernacularity and political agency, pedagogic discourses, the textualization of authority, and the literary construction of cultural and social space. The volume as a whole demonstrates the central contribution of medievalists to 'the production of the present'. Future issues will include essays by Susan Crane, Simon Gaunt, Kantik Ghosh, Steven Kruger, Anne Middleton, Larry Scanlon, Helen Solterer,Robert Stein Jane Taylor and survey articles by Louise Fradenburg and Sarah Kay. Submissions for Volume 3 and subsequent issues may be sent to any of the editors.

new series ... this debut is one distinguished by quality and self-confidence. ... this new series ... has begun splendidly. * Alan J. Fletcher, MLR, 96.I, 2001 *
a bold new annual ... These eclectic essays ... display the beadth and depth of contemporary medieval critical studies. * Michael Calabrese, The Medieval Review *
an invigorating new annual for those who are interested in medieval textual cultures and open to ways in which diverse post-modern methodologies may be applied to them ... The essays in this volume certainly project the vitality of genuine exploration. The first volume of New Medieval Literatures is outstanding in its own right, the most sustained medieval collection of the 1990s I would venture to say. This new annual is professionally launched and clearly has a distinguished future. * Alcuin Blamires, University of Wales, Lampeter, The Review of English Studies, vol 50 , no 199, 1999 *

Medieval Literatures 1997: Breaking the Seal ; Textual Territory: the Regional and Geographical Dynamic of Medieval Icelandic Literary Production ; Counterfeiters, Lollards, and Lancastrian Unease ; Langlandian Reading Circles and the Civil Service in London and Dublin, 1380-1427 ; Conceptions of the Word: the Mother Tongue and the Incarnation of God ; Childhood, Pedagogy, and the Literal Sense: from Late Antiquity to the Lollard Heretical Classroom ; Pedagogy, Violence, and the Subject of Music: Chaucer's Prioress's Tale and the Ideologies of 'Song' ; 'When a Body meets a Body': Fergus and Mary in the York Cycle ; Ageism: Leland, Bale, and the Laborious Start of English Literary History, 1350-1550 ; Literary History and Cultural Study