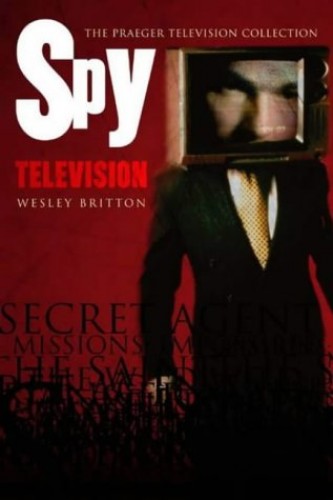 For half a century, television spies have been trained professionals, reluctant heroes, housewives, businessmen, criminals, and comedians.

For half a century, television spies have been trained professionals, reluctant heroes, housewives, businessmen, criminals, and comedians. They have by turns been glamorous, campy, reflective, sexy, and aloof. This is the first book-length treatment of one of TV's oldest and most fascinating genres. Britton's comprehensive guide provides readers, from casual viewers to die-hard fans, with behind-the-scenes stories to this notable segment of television entertainment.

From the early 1960s, in which television spies were used essentially as anti-Communist propaganda, through the subsequent years that both built upon and parodied this model, and finally to today's gadget-laden world of murky motives and complex global politics, spy television has served as much more than mere escapism. From the beginning, television spies opened doors for new kinds of heroes. Women quickly took center stage alongside men, and minority leads in spy programs paved the way for other kinds of roles on the small screen. For half a century, television spies have been trained professionals, reluctant heroes, housewives, businessmen, criminals, and comedians. They have by turns been glamorous, campy, reflective, sexy, and aloof. This is the first book-length treatment of one of TV's oldest and most fascinating genres.

"Britton has written the Baedeker of spy television films and series, an encyclopedic history of this popular television genre....Public libraries; comprehensive academic collections supporting coursework in the history of television." - Choice
"Britton has produced a comprehensive guide to the many espionage-oriented television series that have aired in the United States from the 1960s to the present.... Offers a fascinating window into an understudied genre. The first entry in a new series on television, this work is recommended for academic libraries that support television and popular culture programs and public libraries." - Library Journal
"[A] powerful contribution not only to Praeger's television collection, but to television analysis as a whole....^BSpy Television^R considers the history of spy shows on the screen, why they succeeded or failed, and how fact and fiction have been molded by them." - Internet Bookwatch/The Midwest Book Review
"Spotlight on The Arts Top 10 Performing Arts Book" - Booklist
"Here, for all television addicts, is a much-needed, long-overdue, in-depth exploration of one of the medium's more enduring genres: spy TV....All of the classic series are discussed in considerable detail, but what makes the book such a resounding success for fans of the genre is the coverage of the forgotten show or the curious fact, stuff other books miss but devotees love....Britton's broad knowledge and his commitment to packing as much detail as possible into his book, that makes Spy Television an indispensable addition to any television buff's reference shelf. If you love spy TV, this book is, well...thrilling." - Booklist, Starred Review

WESLEY BRITTON earned his Ph.D. in American Literature from the University of North Texas. Since then he has taught college-level English in Texas, Oklahoma, and Pennsylvania, and has published poetry, book reviews, scholarly, encyclopedia entries, and newspaper columns in various books and periodicals.

Acknowledgments Introduction Defining a Genre The Roots of a Family Tree Bond, Beatles, and Camp: The Men from U.N.C.L.E More British than Bond: John Steed, The Avengers, and Feminist Role-Playing Cold War Sports and Games: I Spy and Radical Politics The Cold War and Existential Fables: Danger Man, Secret Agent, and The Prisoner The Page and the Screen: The Saint and Robin Hood Spies Interchangeable Parts: Missions: Impossible Bond on the Prarie: From The Wild Wild West to the Secret Adventures of Jules Verne Tongues in Cheek to Tongues Sticking Out: Get Smart and the Spoofing of a Genre Also Rans and New Branches: Network Secret Agents from 1963-1980 Reagan, Le Carre, Clancy, Cynicism, and Cable: Down to Earth in the 1980s and 1990s The Return of Fantasy and the Dark Nights of Spies: The X-Files, La Femme Nikita, and the New Millennium Active and Inactive FILES: Alias, 24, The Agency and 21st Century Spies Conclusion The Past, Present, and Future of TV Espionage: Why Spies? Chapter Notes References

GOR010402283
Spy Television by Wesley Britton
Wesley Britton
Used - Very Good
Hardback
ABC-CLIO
2003-11-30
312
0275981630
9780275981631
N/A
Book picture is for illustrative purposes only, actual binding, cover or edition may vary.
This is a used book - there is no escaping the fact it has been read by someone else and it will show signs of wear and previous use. Overall we expect it to be in very good condition, but if you are not entirely satisfied please get in touch with us.