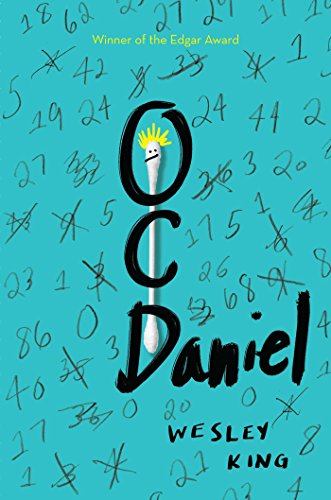 Used Price
$19.49
inc. GST
Free Shipping in Australia
A thirteen-year-old boy's life revolves around hiding his obsessive compulsive disorder until a girl at school, who is unkindly nicknamed Psycho Sara, notices him for the first time and he gets a mysterious note that changes everything.
Very Good

From the author of Incredible Space Raiders from Space! comes a brand-new coming-of-age story about a boy whose life revolves around hiding his obsessive compulsive disorder--until he gets a mysterious note that changes everything.

Daniel is the back-up punter for the Erie Hills Elephants. Which really means he's the water boy. He spends football practice perfectly arranging water cups--and hoping no one notices. Actually, he spends most of his time hoping no one notices his strange habits--he calls them Zaps: avoiding writing the number four, for example, or flipping a light switch on and off dozens of times over. He hopes no one notices that he's crazy, especially his best friend Max, and Raya, the prettiest girl in school. His life gets weirder when another girl at school, who is unkindly nicknamed Psycho Sara, notices him for the first time. She doesn't just notice him: she seems to peer through him.

Then Daniel gets a note: "I need your help," it says, signed, Fellow Star child--whatever that means. And suddenly Daniel, a total no one at school, is swept up in a mystery that might change everything for him.

With great voice and grand adventure, this book is about feeling different and finding those who understand.

King (The Incredible Space Raiders from Space!) offers a candid and memorable account of life with OCD, inspired by his own experience with the anxiety disorder. Thirteen-year-old Daniel Leigh, a wryly funny narrator, has a popular best friend, a crush on a classmate, and a spot on the football team as backup kicker. But he also has a secret that is making him miserable: he is plagued by "Zaps," his name for the triggers--such as an unlucky number or the wrong number of steps--that create a flood of horrible feelings that can only be quelled by certain actions such as flicking a light switch repeatedly. Writing is an outlet for Daniel, and excerpts from the novel he's working on are interspersed throughout. When Sara, a selectively mute school outcast, suddenly begins to speak to him, she draws him into a potential murder mystery and becomes the first person to see and understand his struggle. Daniel's pain and confusion at what he comes to realize is OCD is memorably portrayed in this moving story of self-acceptance--Publishers Weekly

Wesley King is the author of the Edgar Award-winning OCDaniel, which Booklist praised as "complex and satisfying" in a starred review. It was also named a Bank Street Best Book of the Year and received Canada's Silver Birch Award. King's first middle grade novel, The Incredible Space Raiders from Space!, was called "a well-drafted coming-of-age story" by Publishers Weekly. King is also the author of The Vindico and its sequel, The Feros, which were both Junior Library Guild selections, and Kobe Bryant's New York Times bestselling Wizenard series. He lives in Nova Scotia.

GOR009307290
OCDaniel by Wesley King
Wesley King
Used - Very Good
Hardback
Simon & Schuster
2016-05-01
304
1481455311
9781481455312
N/A
Book picture is for illustrative purposes only, actual binding, cover or edition may vary.
This is a used book - there is no escaping the fact it has been read by someone else and it will show signs of wear and previous use. Overall we expect it to be in very good condition, but if you are not entirely satisfied please get in touch with us.