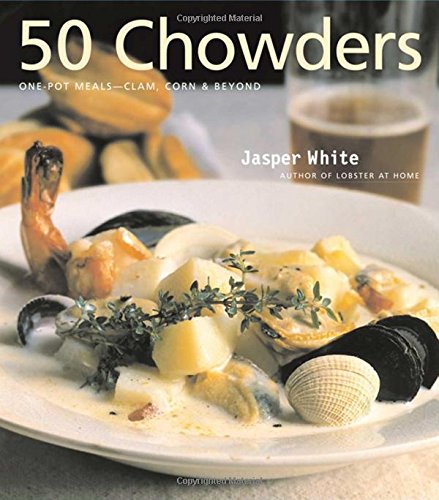 When most of us think of chowder, New England-style fish or clam chowder is what comes to mind, but they are only two of the dozens of home-style chowders you can make from this book. Once you discover the diversity of ingredients you can cook into a chowder and see the scope of styles and colors open to you, you will wonder how we ever came to think there were only one or two chowders in the world.

Authentic chowder is characterized by generous chunks of local seasonal ingredients served in a moderate amount of broth. Another basic characteristic of chowder is its ease of preparation--even chowders that take more than an hour to make don't require anything more than keeping an eye on the pot. A big pot of chowder is perfect for a large gathering of family and friends, and because chowder truly is best when made ahead, you'll have plenty of time to enjoy your company.

50 Chowders is the first hardcover cookbook to explore the many interpretations of chowders. On the familiar side, you will find a recipe for Corn Chowder explained with the kind of detail that ensures a sweet, mellow broth, succulent chunks of potatoes, and fresh golden kernels of corn. On the exotic side, there is a recipe for San Francisco Crab "Meatball" Chowder, an exciting dish whose deep and robust flavors make it really quite special. Here are a few of the more than fifty other chowders you will find: Shaker Fresh Cranberry Bean Chowder, Nova Scotia Lobster Chowder, Nantucket Veal Chowder, Pacific Northwest Salmon Chowder, and nine different clam chowders.

Among this book's unique features: A chapter of chowder companion dishes, from Parker House Rolls to Buttermilk Biscuits; more than fifty illustrations of important cooking techniques and chowder ingredients; cook's notes for each recipe, giving possible substitutions, required equipment, and serving suggestions; a list of reliable mail-order suppliers of seafood and other chowder ingredients.

Jasper White brings to 50 Chowders the same enthusiasm and flair that made his previous book, Lobster at Home, "like having a Down Easter by your side, distilling years of experience and telling you just what to do" (Corby Kummer of The Atlantic Unbound). With this treasure trove of information and expertise in your kitchen, you will never think of chowder in the same way again.

Mark Miller author of Coyote Caf Foods from the Great Southwest For anyone who likes clam chowder or any hearty stew with an earthy soul, Jasper White's book will be a revelation of how easy it is to make great chowders. His instructions and knowledge are like having your own personal secret family recipes. Timeless techniques combined with a creative insight that makes fantastic eating, this book has more useful information on seafood than a whole boat of fishermen.
Jacques P pin I am a great admirer of Jasper's cooking. Thorough, serious, personal, opinionated, and knowledgeable, the recipes in 50 Chowders reflect his gentleness and his professionalism.

Jasper White is recognized as an authority on seafood and traditional New England cooking. In 1983, Jasper and his wife Nancy opened Jasper's, the only Boston restaurant ever to be awarded four and a half stars by The Boston Globe. It was also named Boston Magazine's Best of Boston for eleven out of twelve years. Jasper's also won the prestigious Ivy Award.

In 1990, Jasper was named the James Beard Best Chef in the Northeast, crowning his career. Jasper White is currently head chef and partner of Jasper White's Summer Shack, a casual, friendly restaurant in Cambridge, Massachusetts, that serves many of the dishes featured in 50 Chowders.