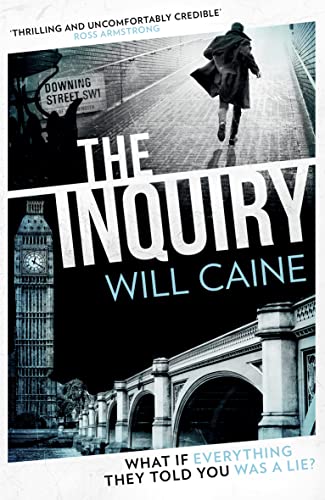 The Inquiry
by Will Caine

'Knowledge of these files is classified.

You must not use police or intelligence services to carry out your investigation. Those channels are compromised.

A final warning: you must move fast.'

The Inquiry by Will Caine

'Knowledge of these files is classified.

You must not use police or intelligence services to carry out your investigation. Those channels are compromised.

A final warning: you must move fast.'

Former MP Francis Morahan swore never to return to politics. But when he's asked to chair a government inquiry into the intelligence agencies' record against terror, it's clear that it's an order from the top - not a request.

Sara Shah once teetered on the edge of a dangerous circle. Now a lawyer in a prestigious London firm, she's put her past behind her. Until a letter delivered by hand summons her to join the Morahan Inquiry.

Duty-bound, Sara accepts. Armed only with a list of names, dodging her one-time connection to the networks she infiltrates, she finds herself led by an anonymous source into the darkest corners of post-9/11 Britain.

What, or who, was the weapon at the heart of British terror?

IT IS A SECRET SOME WILL STOP AT NOTHING TO KEEP HIDDEN.

Westminster's best-kept secrets are hunted down in this edge-of-your-seat political thriller - perfect for fans of Sam Bourne, Frank Gardner and Mick Herron.

PRAISE FOR THE INQUIRY

`Fast-paced, thrilling and uncomfortably credible' Ross Armstrong, author of The Girls Beneath

`An excellent first book by a writer who knows his stuff. I won't write any spoilers but this is a tense and exciting thriller with a massive twist at the end. Highly recommended' Greville W (Netgalley)

Will Caine lives in South London, and is a BAFTA award-winning and highly acclaimed investigative film-maker and journalist.

He has spent much of his life delving into the secrets of state, and has written non-fiction books under another name.

The Inquiry is his first thriller.

GOR009703002
The Inquiry by Will Caine
Will Caine
Used - Very Good
Paperback
Unknown
0
0008325618
9780008325619
N/A
Book picture is for illustrative purposes only, actual binding, cover or edition may vary.
This is a used book - there is no escaping the fact it has been read by someone else and it will show signs of wear and previous use. Overall we expect it to be in very good condition, but if you are not entirely satisfied please get in touch with us.