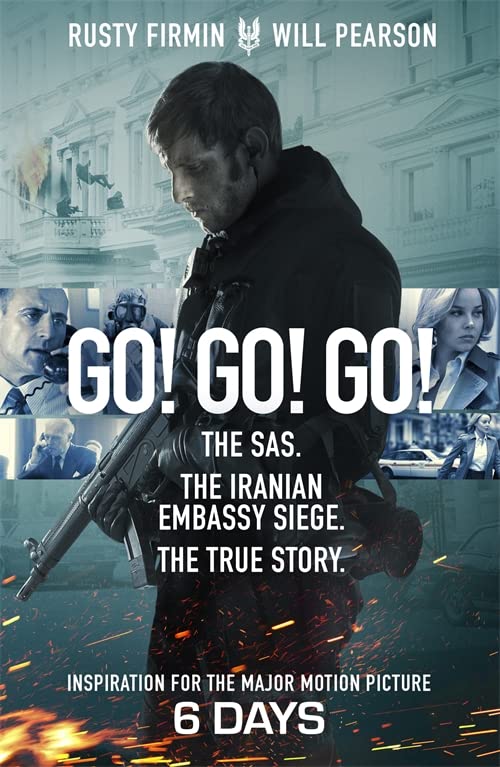 Go! Go! Go!
by Will Pearson

Out of Stock
$17,49
inc. GST
The first comprehensive account of the storming of the Iranian Embassy in London in 1980.
Like New
Only 0 left

Go! Go! Go!: The SAS. The Iranian Embassy Siege. The True Story by Will Pearson

Go! Go! Go! tells the action-packed story of the 1980 Iranian Embassy siege. It is a comprehensive and gripping account of an unforgettable six-day drama that shook Britain - and the wider world - to the core. Drawing on original and unseen source material from ex-SAS soldier Rusty Firmin, the police and the British Government, Go! Go! Go! takes us to the heart of the whole operation.

The assault planning and training, strategy and tactics are described in detail, and the personal stories of the gunmen revealed - who they were, where they came from, why they did it and Saddam Hussein's direct involvement. Compelling accounts of each day of the siege from the hostages' points of view show how they dealt with captivity individually and collectively. And new material explains the negotiators' tactics and their cool exterior versus their internal turmoil as negotiations reached crisis point.

A pacy, tabloid-style blow-by-blow narrative. It should delight fans of derring-do ... admirably told - SUNDAY TIMESThose who enjoy reading about the technical details of military activity will not be disappointed but there is also plenty of human interest - DAILY EXPRESS

Will Pearson (Author)
Will Pearson ran away from home aged fifteen and joined the Royal Navy. Seven years and two world tours later, he won a scholarship to Ruskin workers' education college, and then read Modern Languages at Oriel College, Oxford. After various careers, Will turned his hand to writing. His military experience and contacts led to a breakthrough book, the best-selling Tornado Down, written with the RAF's John Peters and John Nicol. He has also produced and scripted documentaries and written for the Financial Times, Daily Mirror and many other publications. He lives in London with his wife and two children.

Rusty Firmin (Author)
Rusty Firmin was born in Carlisle in 1950. He joined the Royal Artillery at an early age and was then posted to 49 Field Regiment RA and subsequently to the 29 Commando RA. Getting a taste for commando ops, Rusty passed the SAS gruelling selection and joined B-Squadron 22 (SAS) Regiment in 1977. Following covert tours in Northern Ireland with the SAS, Rusty then led part of the iconic assault to rescue the hostages from the Iranian embassy in 1980. A fitness fanatic who represented the British Army at football, Rusty lives in rural Herefordshire.

GOR008564077
Go! Go! Go!: The SAS. The Iranian Embassy Siege. The True Story by Will Pearson
Will Pearson
Used - Like New
Paperback
Orion Publishing Co
2017-07-20
240
1474608051
9781474608053
N/A
Book picture is for illustrative purposes only, actual binding, cover or edition may vary.
The book has been read, but looks new. The book cover has no visible wear, and the dust jacket is included if applicable. No missing or damaged pages, no tears, possible very minimal creasing, no underlining or highlighting of text, and no writing in the margins.