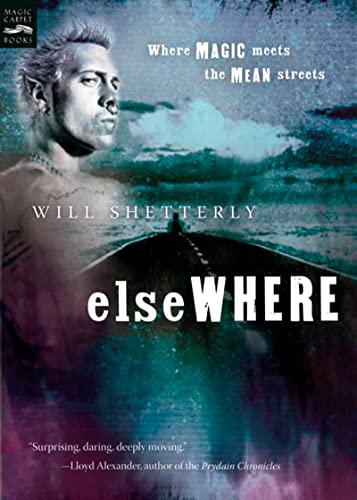 Elsewhere
by Will Shetterly

In Stock
$14.49
+10% GST
Ron, a teenage runaway, comes of age among the punk elves and humans of Bordertown, a run-down city on the border between the real world and the magic world of Faerie.
Very Good Good
Only 2 left

Elsewhere by Will Shetterly

When Ron runs away, he ends up in Bordertown, a grim city that lies between the real world and the world of faerie, a place where elf and human gangs stalk the streets side by side, and where magic works better than technology. If the city doesn't kill him, it just may teach him what it is to be human.

"Shetterly has just enough distance from his hero to shape [his] troubled journey with skill and conviction, too little distance to patronize."--The Village Voice Literary Supplement

"Breaks ground that other writers will certainly try to cultivate."--Minneapolis Star Tribune

"Sometimes violent and profane, yet beautifully written . . . Not for the weak of heart, but a book for the adventurous soul."--The New Advocate

WILL SHETTERLY is the author of nine novels and numerous short stories, comic books, and screenplays. His American magical-realist novel Dogland was called "a masterwork" on National Public Radio. He lives in Bisbee, Arizona.

GOR008758135
Elsewhere by Will Shetterly
Will Shetterly
Used - Very Good
Paperback
Unknown
0
0152052097
9780152052096
N/A
Book picture is for illustrative purposes only, actual binding, cover or edition may vary.
This is a used book - there is no escaping the fact it has been read by someone else and it will show signs of wear and previous use. Overall we expect it to be in very good condition, but if you are not entirely satisfied please get in touch with us.