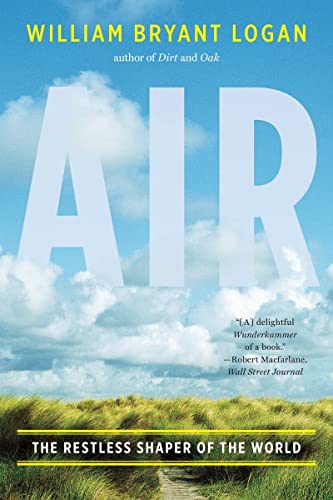 In a sublime exploration of the most unpredictable element of the earth, William Bryant Logan opens our eyes to the astonishing physics, chemistry, biology, history, art, and even music of the air.

Air: The Restless Shaper of the World by William Bryant Logan

Air sustains the living. Every creature breathes to live, exchanging and changing the atmosphere. Water and dust spin and rise, make clouds and fall again, fertilizing the dirt. Twenty thousand fungal spores and half a million bacteria travel in a square foot of summer air. The chemical sense of aphids, the ultraviolet sight of swifts, a newborn's awareness of its mother's breast-all take place in the medium of air.

Ignorance of the air is costly. The artist Eva Hesse died of inhaling her fiberglass medium. Thousands were sickened after 9/11 by supposedly "safe" air. The African Sahel suffers drought in part because we fill the air with industrial dusts. With the passionate narrative style and wide-ranging erudition that have made William Bryant Logan's work a touchstone for nature lovers and environmentalists, Air is-like the contents of a bag of seaborne dust that Darwin collected aboard the Beagle-a treasure trove of discovery.

As with his earlier works . . . [Logan] celebrates the union of the inorganic and organic realms that nurture life. . . . Logan celebrates the atmosphere as a medium of communication-transmitting pheromones as well as sound, bird calls, music-and notes that the breath of life separates the living from the dead.

" -- Kirkus Reviews (starred review)
"[A] delightful Wunderkammer of a book. . . . Air is... a spore-world of essays, essaylets, mini-biographies, gossip, whispers, lists, prose-poems and asides. ...Cheery, chatty and compulsively curious, Mr. Logan is able to draw the reader into pretty much any subject... In this lovely book, Mr. Logan makes the air airy again." -- Robert Macfarlane - Wall Street Journal
"Logan is an enjoyable companion with which to explore his subject. He is erudite and thoughtful, with an agreeable mix of the personal and scientific" -- David B. Williams - Seattle Times
"Logan's meticulously researched and engagingly presented treatise is a breath of, well, fresh air." -- Carol Haggas - Booklist (starred review)
"Splendid. . . . Logan delivers vast amounts of science with brevity and elegance." -- Nature

William Bryant Logan is a practicing arborist and the author of four acclaimed books on nature: Sprout Lands, Dirt, Oak, and Air. He lives in Brooklyn, New York.

GOR007037227
Air: The Restless Shaper of the World by William Bryant Logan
William Bryant Logan
Used - Very Good
Paperback
WW Norton & Co
2013-07-01
416
0393345394
9780393345391
N/A
Book picture is for illustrative purposes only, actual binding, cover or edition may vary.
This is a used book - there is no escaping the fact it has been read by someone else and it will show signs of wear and previous use. Overall we expect it to be in very good condition, but if you are not entirely satisfied please get in touch with us.