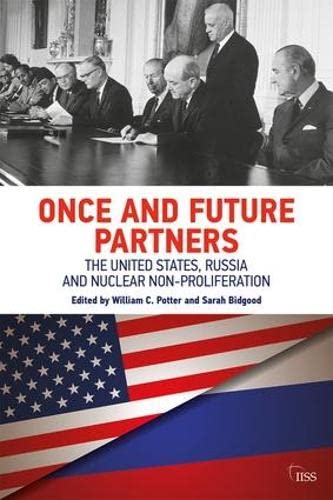 Once and Future Partners
by William C. Potter

Once and Future Partners Summary

Once and Future Partners: The US, Russia, and Nuclear Non-proliferation by William C. Potter

Despite their Cold War rivalry, the United States and the Soviet Union frequently engaged in joint efforts to prevent the spread of nuclear weapons. Leaders in Washington and Moscow recognized that nuclear proliferation would serve neither country's interests even when they did not see eye-to-eye in many other areas. They likewise understood why collaboration in mitigating this nuclear danger would serve both their own interests and those of the international community. This volume examines seven little known examples of US-Soviet cooperation for non-proliferation, including preventing South Africa from conducting a nuclear test, developing international safeguards and export control guidelines, and negotiating a draft convention banning radiological weapons. It uses declassified and recently-digitized archival material to explore in-depth the motivations for and modalities for cooperation under often adverse political circumstances. Given the current disintegration of Russian and US relations, including in the nuclear sphere, this history is especially worthy of review. Accordingly, the volume's final chapter is devoted to discussing how non-proliferation lessons from the past can be applied today in areas most in need of US-Russian cooperation.

1. The origins of US-Soviet non-proliferation cooperation

3. Peaceful nuclear explosives: from the Limited Test Ban Treaty to the Treaty on the Non-Proliferation of Nuclear Weapons

5. The establishment of the London Club and nuclear-export controls

6. US-Soviet Cooperation on IAEA Safeguards: patterns of interaction and their applicability beyond the Cold War

8. Lessons for the Future

GOR009344166
Once and Future Partners: The US, Russia, and Nuclear Non-proliferation by William C. Potter
William C. Potter
Adelphi series
Used - Like New
Paperback
Taylor & Francis Ltd
2018-07-27
294
1138366366
9781138366367
N/A
Book picture is for illustrative purposes only, actual binding, cover or edition may vary.
The book has been read, but looks new. The book cover has no visible wear, and the dust jacket is included if applicable. No missing or damaged pages, no tears, possible very minimal creasing, no underlining or highlighting of text, and no writing in the margins.